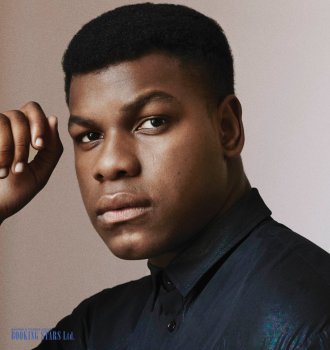 John Boyega (real name John Adedayo B. Adegboyega) was born on 17 March 1992 in London. John was thinking about becoming an actor when he was still very young. When Boyega was just 9 years old, he already performed in school plays. During one of those performances, the representative of Peckham Theater noticed him. She invited John to study and perform at the theater. The boy attended the classes until he was 14 years old. At the same time, he studied in Identity School of Acting in Hackney. While in college, John landed a leading role in the play Othello.

At the beginning of his acting career, John performed in National and Tricycle theaters, which proved to be a very useful experience. Shortly, the talented young man was invited to play in the sci-fi comedy Attack the Block. The movie came out in 2011 and brought John popularity and approval from the critics. He was named “Best Actor” at Black Reel Award and earned two more nominations for it. Boyega also received a variety of nominations, including one for London Film Critics' Circle Award as "Young British Performer of the Year". The fame brought John Boyega many invitations to private events and fan birthday parties.

Boyega’s next project was the movie Junkhearts. He played the supporting role of a drug dealer. The movie earned prizes at the London Film Festival and the 34th Moscow International Film Festival.

In a drama based on the novel by Chimamanda Ngozi Adichie, Half of a Yellow Sun, John had the role of a servant. The movie premiered in 2013 at the Toronto Film Festival.

In 2014, John landed a leading role in the drama Imperial Dreams. The young actor portrayed a 21-year-old gangster, who did prison time and tried to adapt to the society for the sake of his family. The same year, Boyega found out that he was granted the leading role of Finn in the epic space opera Star Wars. Episode VII: The Force Awakens. The movie premiered in 2015 and brought the actor immense fame. The critics approved his work. Boyega earned a variety of prestigious awards, including BAFTA.

The actor also received a number of nominations, including Saturn Award as "Best Actor” and Nickelodeon Kids' Choice Award in the "Favorite Movie Actor" category. The movie earned more than $2 billion, making both the creators and the cast rich and famous.

In 2017, John appeared in the next part of the space opera Star Wars: Episode VIII - The Last Jedi. The movie and John’s performance were highly successful. The actor earned a “Best Actor” nomination for Empire Award.

The same year Boyega worked on two more movies. In the thriller The Circle, John appeared alongside such celebrities as Emma Watson and Tom Hanks. He also landed a leading role in the crime drama Detroit.

In 2018, John had the starring part in the science fiction film Pacific Rim: Uprising. Besides working hard on the leading role, Boyega acted as a producer. It was the first movie John has ever produced. As of May 2018, considering all the filming expenses, the movie hasn’t grossed enough money to break even.