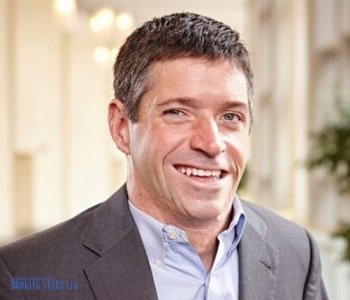 When John O’Leary (Cook ’99) was 9 years old, he decided to experiment with fire and gasoline in his family’s garage. His innocent undertaking caused an instant explosion. O’Leary was burned over 100 percent of his body; 87 percent was third-degree. His doctors and nurses did not think he would make it through the night; he was given a less than 1 percent chance of surviving.

But survive he did. After a grueling but miraculous recovery — his doctor told him he had never seen anything like it in his entire career — O’Leary worked to put the fire behind him. He enrolled at Saint Louis University, where he met his wife, Beth (Hittler) O’Leary (Doisy ’01), who is now a SLU adjunct instructor in occupational therapy.

After college, he started a real estate development business with a fellow SLU alumnus. He later pursued a chaplaincy program through SLU and worked as a hospital chaplain for three years. He and Beth began having children — they now have four. But he never talked much about the fire; even Beth and his college roommates knew few details about how he had gotten his scars.

That changed in 2005, when his parents, Susan and Denny (Law ’68), published a book, Overwhelming Odds, about that fateful day in 1987 and the journey for their family that followed.

“It was an unauthorized biography of my life,” O’Leary joked. “It changed my life.”

His parents’ telling of it helped him realize that the fire and its aftermath had brought out the best in everyone around him, from his sister Susan, who risked her life running into their burning house to retrieve cups of water to pour onto his face; to his hospital-room janitor, who kept it spotless and free of infection; to broadcaster Jack Buck, who sent him more than 60 autographed baseballs from St. Louis Cardinals baseball players to encourage him to learn to write again, despite having had his fingers amputated.

“Our neighbors opened up their homes to my siblings as we waited for the house to be repaired; the community raised money, donated blood, offered prayers, brought food,” he wrote. “I had never before fully considered all the people who came together to make the miracle a reality. … As if cataracts had been cut away, I understood, ‘Oh my gosh … it was all a gift.’”

Three months after his parents’ book was published, O’Leary was asked to give a speech about his experiences. Despite being terrified of public speaking — he said he barely scraped by in his required public speaking course at SLU — he agreed. Then he was asked to speak again and again.

I think it’s a reflective story that inspires others to be the best version of themselves, helping them realize they can do so much more in their lives than what they had been doing, and that everything they do going forward from this moment will make a difference.”

Now, over a decade later, O’Leary has given more than 1,500 talks around the country and the world, describing the small acts of kindness from strangers and friends alike that contributed to his recovery and growth, and the lessons he learned that he believes can be applied to the difficult situations in everyone’s lives. He encourages his audiences, from health care workers to prison inmates, to live their lives “radically inspired.”

And in March of this year, O’Leary’s own book, On Fire: The 7 Choices to Ignite a Radically Inspired Life, was published by Simon & Schuster. The book became a No. 1 national best-seller and is already being printed in 12 languages.

“It was very, very raw and personal to write about the experiences of being burned as a kid,” he said. “It’s been very therapeutic, very healing and transformative as we’ve gone farther and farther down the path to realize it’s not an autobiography. I think it’s a reflective story that inspires others to be the best version of themselves, helping them realize they can do so much more in their lives than what they had been doing, and that everything they do going forward from this moment will make a difference.”

“I was in Dallas recently, and a woman drove two-and-a-half hours to hear me speak for the 11th time,” he said. “She says that she has transformed her life spiritually, relationally and professionally as a result of these encounters, and she’s going to keep driving two-and-a-half hours to keep growing. That just blows me away, and it’s proof that this story’s not about the man writing it; it’s about the individuals living it. It can change lives.”

O’Leary’s book “On Fire” has been on the best-seller lists for USA Today, Amazon and Publishers Weekly, among others.
“The reason why the book works and why people are happy for my wife and me is because we are the same people before the book, within the book and then after the book,” he said. “It hasn’t changed us, and we’re not trying to put on pretenses. And, candidly, we’re not the heroes in that book as much as all the other people who show up in our lives. We’re celebrating them and our decision to be more like them in our own life, so we’re trying to be that radically inspired life; we’re not claiming that we have it.

“We have spilled milk and Cheerios on the floor like everyone else,” O’Leary said. “And you can either yell about it, or you can grab the mop and broom and take care of it. You can either be grateful for it all, or overwhelmed in a negative way by it all. When we are being intentional and living each day fully, we’re just grateful for all the gifts that we have, even the Cheerios on the floor.”

Through it all, O’Leary said his Billiken friends continue to be some of his most enthusiastic cheerleaders.

“They celebrate the guy they knew in the quad, the guy they sat next to at Humphrey’s; they’ve just loved me for who I was throughout it all,” he said. “So I’m grateful for the friendships that were formed at SLU and remain dear to us today. The success I had in my first business, becoming a hospital chaplain, finding a wife, the four children, and even today with the speaking and writing career, it’s a direct result of Saint Louis University.”— By Maria Tsikalas