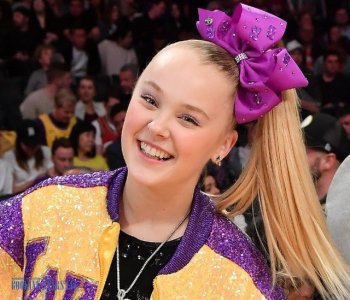 JoJo Siwa is an American singer, dancer and YouTube personality who's famous for donning big bows in her hair and for her hit singles "Boomerang" and "Hold the Drama." JoJo Siwa first became famous by appearing as a reality TV star on Lifetime's Dance Moms and Abby's Ultimate Dance Competition. But Siwa quickly found a second act, becoming a huge social media celebrity thanks to her YouTube channels. Known for wearing bright, big bows and colorful ponytails, Siwa is a trifecta of talent — dancing, acting and singing — which she skillfully demonstrates in her music videos for hit singles like "Boomerang," "Kid in a Candy Store" and "Hold the Drama." Siwa has been able to further capitalize on her fame through merchandising deals and a contract with Nickelodeon, through which she co-hosted Lip Sync Battle Shorties with Nick Cannon.

Siwa was born Joelle Joanie Siwa on May 19, 2003, in Omaha, Nebraska, to Tom, a chiropractor, and Jessalyn, a dance instructor. Siwa has an older brother named Jayden.

One of Siwa's earliest hits was the 2016 single "Boomerang," in which she sings about cyberbullying and the courage to move beyond the negativity. She followed up the next summer with a lighter and much sweeter subject, the confectionary treat "Kid in a Candy Store." The song and accompanying music video were so popular that a Siwa 'Kid in a Candy Store' singing doll soon followed.

Just a few months later, the candy queen turned up the beat with "Hold the Drama," another don't-listen-to-the-haters and live-your-best-life pop track, filled with sparkle, fun dance numbers and her signature big, bright bows.

Bows
In a video interview, the social media celebrity admitted she's been obsessed with bows since pre-school, and as she's gotten older, they've just gotten bigger and bigger. She also added that for her, bows symbolize "power, confidence, believing-ness."

Naturally, Siwa has transformed her bow obsession to a business and has launched her own line. Her bows have become so popular among young school girls that it's reportedly become a source of disruption in the classroom and has inspired competitors to issue similar and less expensive versions.

Following her early reality TV work, Siwa began appearing on kids shows like Bizaardvark, The Thundermans and School of Rock. Signed to Nickelodeon in 2017, she began co-hosting Lip Sync Battle Shorties with Nick Cannon. The following year, Siwa made her film debut in Nickelodeon's Blurt and received the animated treatment alongside her beloved Teacup Yorkie with The JoJo & BowBow Show Show. She then snagged a voice role in 2019's The Angry Birds Movie 2, before appearing on the TV competition series The Masked Singer as T-Rex in early 2020.

Siwa appeared as "T-Rex" in the third season of The Masked Singer, ultimately being eliminated in the ninth episode.

After originally rising to fame with the YouTube channel JoJo Siwa Vlogs, the entertainer split her YouTube presence into two channels, JoJo Siwa Music and Its JoJo Siwa, the latter one featuring clips from everyday life that include one in which she lets a two-year-old cut her hair and another that shows her creating a slime factory at home using arts and crafts.

Siwa is said to be the sole creative force behind her videos, with her mom, who serves as her manager, assisting by way of driving her around town to pick up supplies.

“It’s really fun for me,” Siwa told USA TODAY about creating her vlogs. “It’s like my version of going to the park.”

In addition to her bow line, singing dolls and Nickelodeon deal, Siwa has also launched books, as well as lifestyle merchandise through JCPenney.

In January 2021, Siwa came out as a member of the LGBTQ+ community by posting a photo on her Twitter account of her wearing a shirt that said "Best. Gay. Cousin. Ever." "I'm the happiest I've ever been, that's what matters," she said in an Instagram live chat.