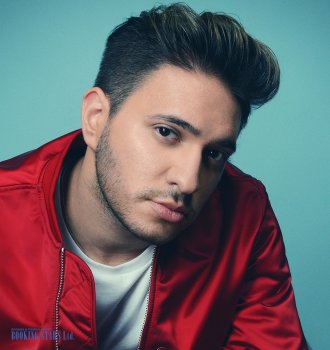 Jonas Blue (real Guy James Robin) was born on August 2, 1989, in Essex, UK. Even though Jonas is at the very beginning of his music career, he already managed to become famous all over the world with his single “Fast Car”, which came out in 2015. He recorded the song with the help of an aspiring singer Dakota. For her, it’s the only hit single so far. Unlike his partner, Jonas is actively continuing his star-studded career, recording one hit after another.

Jonas Blue grew up in London. Not much is known about his childhood so far but he took the music industry by the storm and made a name for himself as a very successful British musician. Many organizers are trying to book Jonas Blue for private events but it’s becoming harder every day.

Jonas’ songs are unique because he manages to work with virtually all types of music. He easily sculpts pop music and respects classical dance tracks. Blue works with tropical house elements and many other genres. He creates truly original and interesting songs, taking up a long-awaited new niche in the British music industry.

Blue’s debut and the most famous single to date “Fast Car” came out in 2015. The idea to create the song came to the artist when he decided to recreate one of his mother’s favorite songs, which she sang when he was young. Jonas remembers that recording the music was easy. It turned out to be much harder to find a singer with a strong enough voice to satisfy Blue’s cravings for childhood impressions. Dakota’s deep and rich voice turned out to be ideal for the project.

“Fast Car” literally conquered the charts all over the world. It reached the 2nd spot on UK Singles Chart, climbed Australian ARIA chart and became a hit in Germany, New Zealand, and Sweden. It’s the only song written by Jonas so far to make it into Billboard Hot 100. However, it managed to reach the third place from the end. The raving success of the single showed the world and music industry stars that they have a new figure to respect.

The official video for the single collected over 60 million views on YouTube to date. The song earned several platinum certificates, two of which came from UK and three from Australia. It also brought the singer a nomination for the MTV Europe Music Awards as Best Push Act.

In 2017, Blue recorded his first studio compilation album Jonas Blue: Electronic Nature – The Mix 2017. Even though the LP didn’t make it into UK Albums Chart, it reached respectable spots in Finnish and USA charts. Beside “Fast Car”, the compilation LP featured three more hits. The song “Perfect Strangers” reached the 2nd spot on UK Singles Charts and earned 6 platinum certifications in different countries. RIAA gave the song a gold status for great sales in the USA.

Jonas Blue is actively working on his music career. He already recorded several songs for his upcoming studio album, the name and release date of which haven’t been announced yet.