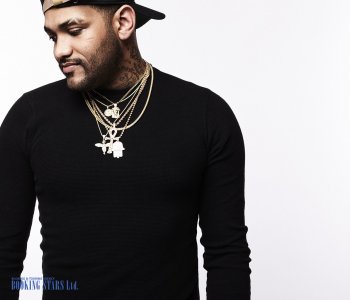 New England rapper Joyner Lucas burst from the central Massachusetts underground in the mid-2010s with dense, thoughtful rhymes and hard-hitting production inspired by predecessors Jay-Z, Eminem, and 2Pac. Singles "I'm Not Racist" and "Devil's Work" garnered controversy for their uncompromising socio-political views, with the former earning Lucas his first Grammy nomination. He received a second nomination -- for a collaboration with Eminem -- before the arrival of his official studio debut, ADHD, released in 2020.

508-507-2209Born Gary Maurice Lucas, Jr. in Worcester, Massachusetts in 1988, he developed his love for hip-hop at an early age. By seven, he was already writing his own rhymes under the moniker "G-Storm" and would go on to collaborate with his uncle (who was just a few years older than he was) on various musical projects. In his teens, he briefly worked under the stage name "Future Joyner" but decided to use his birth name in 2012, after rapper Future rose to fame. In 2015, having already created original work for most of his life, Lucas' first solo mixtape, Along Came Joyner, was released. It featured the breakout single and video "Ross Capicchioni," a song inspired by the near-death shooting of a Detroit teen of the same name, told from the perspective of both the victim and the shooter. Several more successful singles followed, and in 2016 Lucas signed to Atlantic Records. His fourth mixtape, 508-507-2209, was released in the summer of 2017. Later that year, his single "I'm Not Racist" went viral due in part to its politically charged, Grammy-nominated music video.

KamikazeIn 2018, Lucas paired with Chris Brown for the collaborative project Angels & Demons, which was released in February. Months later, a feature on Eminem's Kamikaze landed Lucas on the Billboard Top Ten for the first time in his career. That single, "Lucky You," earned Lucas a second Grammy nomination. To close out his busy year, he released the single "I Love," the first taste of his official debut studio effort, ADHD. Second single "Devil's Work" arrived in May 2019, raising eyebrows for its controversial yet poignant message. ADHD finally saw the light of day in March of 2020, landing at number ten on the Billboard 200. In addition to production by Boi-1da and Timbaland, the LP also featured guests Young Thug, Fabolous, Logic, and frequent collaborator Chris Brown.