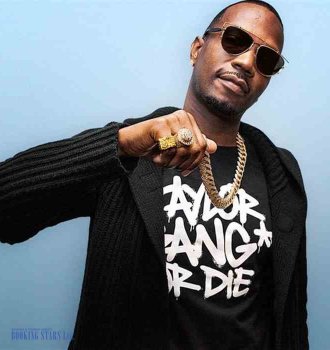 Juicy J’s real name is Jordan Michael Houston. He was born on 5 April 1975 in Memphis, Tennessee.

The artist began his music career when he was just 16 years old. During that period, he formed his band Three 6 Mafia. The band helped develop a new music style, called south hip-hop. Initially, besides Jordan, the lineup included DJ Paul, Lord Infamous, Crunchy Black, Gangsta Boo, and Koopsta Knicca. However, it took three years to finalize all the details and start working. In 1995, the band released its debut LP, Mystic Stylez. The album climbed to the 59th spot of US Top R&B/Hip-Hop Albums Chart.

Jordan stayed with the band until 2012. He wrote many songs and performed them as a vocalist. Juicy J also acted as a producer. The group released nine successful albums. The last two Most Known Unknown and Last 2 Walk reached the top-10 of Billboard 200. The group also earned several awards, including an Academy Award for the song "It's Hard out Here for a Pimp". Three 6 Mafia fell apart in 2012.

While still with the band, Juicy recorded two solo albums Chronicles of The Juice Man and Hustle Till I Die. Both appeared on Billboard 200.

Even though, officially, Juicy J left the band in 2012, he stopped spending the majority of his time on its work in 2009. Back then, he started working with Wiz Khalifa. He helped record several songs for the rapper’s mixtape, Blue Dream & Lean. In 2011, there were rumors that Jordan would leave Three 6 Mafia to join Wiz Khalifa’s band Taylor Gang. However, it didn’t happen. Juicy left the group and began a solo career.

In 2012, Juicy J recorded a promo single "Bandz a Make Her Dance" for his studio album, Stay Trippy. The single was recorded together with 2 Chainz and Lil Wayne. Mike Will co-produced it. The song reached the 29th spot of Billboard 200. It was an excellent result for one of the first official solo singles released by the artist. At that time, many fans tried hard to book Juicy J for their events.

In September 2012, the musician changed labels and signed contracts with Columbia Records and Dr. Luke's Kemosabe Records. These labels helped him record his solo LP, Stay Trippy. To create the album, Juicy asked for some help from such famous rappers as Nas, Dr. Dre, and Jay-Z. The LP reached the 4th spot on Billboard 200 and came in second on US Top R&B/Hip-Hop Albums. The album also appeared on the 11th position of Canadian Albums Chart. The most famous songs featured in the LP were "No Heart No Love", "Bandz a Make Her Dance", "All I Blow Is Loud", and "Show Out".

In 2013, Katy Perry invited Juicy J to help her record a single “Dark Horse”. The song became a huge hit. It earned a diamond status in the USA and topped Billboard Hot 100.

In 2014, the rapper with the help of Wiz Khalifa and Ty Dolla Sign recorded a song for the Teenage Mutant Ninja Turtles soundtrack. “Shell Shocked” earned a gold status in the USA.

In 2017, the rapper released a new LP, Rubba Band Business, the promotional singles for which kept appearing throughout 2016. The LP was fairly successful, reaching the 191st spot on Billboard 200. The fans gave high scores to such singles as "Feed the Streets", "Dodgin' the Snakes", "A Couple", and "Buckets".