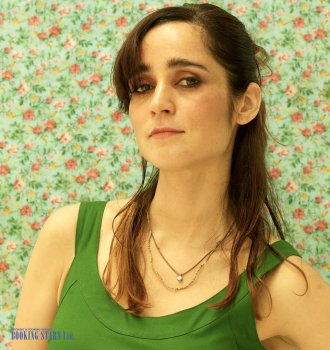 Julieta Venegas Percevault was born on 24 November 1970 in Baja California (Mexico). She was growing up in Tijuana together with her twin sister Yvonne and other siblings. When Venegas turned eight years old, she started playing the piano. Initially, Juliet was studying vocals, music theory, and cello at La Escuela de Música del Noroeste music school. Then she continued her studies in San Diego South Western College.

In 1992, the singer moved to Mexico, when she immediately became very popular on the local music scene. At the same time, Venegas started writing music for various plays and learned how to play the accordion. She was one of the first members of a popular Mexican ska/rock band Tijuana No! Venegas co-wrote their hit song "Pobre De Ti." A while later, the talented young woman decided to create her own band, La Milagrosa. She invited Fratta (multi-instrumentalist) and Rafael Gomez (producer) to join her. However, in a short while, she got a contract offer from BMG label and decided to pursue a solo career.

In 1997, the singer released her debut album Aquí, which was recorded with the assistance of an Argentinean producer Gustav Santaolalla. Venegas didn’t just perform the songs, she played the piano, guitar, and accordion. Over 300,000 copies of the LP were sold in Mexico.

In 2000, Venegas released her second album Bueninvento. This time, the singer invited several other musicians to perform the music. As a result, she recorded a true Spanish rock LP. It was recorded in LA, Mexico, and Monterey. Venegas wrote 13 out of 14 songs, including the track dedicated to the Mexican music legend Juan Gabriel.

In 2003, Venegas recorded a new album Si. The LP was certified platinum three times in Mexico and reached the top-5 on the US Latin Album Chart. Three singles from the album became big hits that reached top spots of the Mexican and American charts. The most popular song was “Algo Esta Cambiando”. The LP brought Venegas her first Latin Grammy Award and three MTV Music Video awards.

The next album Limón y Sal (2006) was written with the assistance of two producers, Coti Sorokin and Cachorro Lopez. The leading single “Mi Voy” stayed on the Mexican singles chart for twelve weeks. It reached the top spot on the Spanish charts and the second spot of the Swiss Singles Chart. The song “Eres Para Mi” was even more popular. It became an international hit. Considering the growing popularity of the signer, it was becoming impossible to book Julieta Venegas for any event.

In 2010, Venegas released her fifth LP Otra Cosa together with Cachorro Lopez. The rock/pop album contained many interesting songs with thoughtful lyrics. When recording the LP, Venegas played the accordion, piano, and guitar.

In 2013, Julieta recorded Los Momentos. She dedicated some of the songs to the drug-related violence in Mexico and some songs to motherhood. Even though the lyrics were rather serious, the music was upbeat. The LP reached the second spot on Billboard Latin Pop Albums.

In 2015, Julieta released another popular LP Algo Sucede, which reached the 11th spot on the Mexican Albums chart and topped Billboard Latin Pop Albums. The single from the album “Ese Camino” was nominated for Latin Grammy Awards twice.