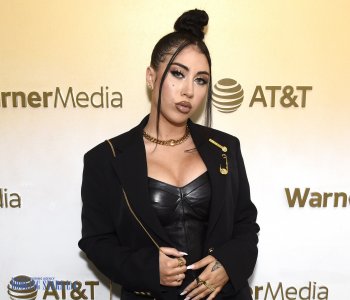 Kali Uchis - Left-field pop polyglot nominated for multiple Grammy awards before she hit the Top Five of the R&B album chart with Isolation.

The stylistic range of left-field pop artist Kali Uchis is reflected in the variety of her collaborators -- an extensive genre-crossing list that includes Tyler, The Creator, Gorillaz, Daniel Caesar, Juanes, and BadBadNotGood. A singer, songwriter, and producer, as well as a video director, Uchis truly arrived on her own with the self-released Por Vida (2015), an EP that led to a deal with Virgin EMI.

By the time Uchis released her lively debut full-length, the Top Five Billboard R&B/hip-hop hit Isolation (2018), she had already been nominated for Grammy Awards through her featured appearances on Caesar's "Get You" and Juanes' "El Ratico." 2019 saw the issue of "Time," a collaborative single with the disembodied voice of late rapper Mac Miller. April 2020's To Feel Alive EP was written and recorded in response to the global COVID-19 pandemic.

Born Karly-Marina Loaiza, Kali Uchis experienced the majority of her upbringing in Virginia and also spent time in her parents' native Colombia.

As a teenager growing up in Alexandria, just south of Washington, D.C., she learned to play piano and saxophone and also developed a deep interest in visual arts. Her recorded debut was made in 2012 with the self-released mixtape Drunken Babble.

Within three years, she had several singles to her credit, including "Know What I Want" and "Lottery," typically promoted with videos she directed, as well as collaborations with Snoop Dogg, GoldLink, Tyler, The Creator, and Major Lazer. Following the 2015 independent release of Por Vida, a free digital-download EP with tracks produced by Diplo, Kaytranada, and Tyler, Uchis started releasing her material through major-label Virgin EMI.

A DJ Dahi-tweaked version of Por Vida's "Ridin Round," issued that November after a move to Los Angeles, was the artist's first single for the major label.

"Only Girl," a relaxed Kaytranada production featuring Vince Staples and the Internet's Steve Lacy, followed in April 2016. She was also featured that year on Daniel Caesar's "Get You."

Throughout 2017, Uchis added to her discography of featured appearances via tracks by Juanes, Gorillaz, Tyler, Bootsy Collins, and Miguel, and she previewed her debut album with the singles "Tyrant" (featuring Jorja Smith) and "Nuestro Planeta" (featuring Reykon).

By the end of the year, "Get You" had been nominated for a Grammy in the category of Best R&B Performance, and Juanes' "El Ratico" made Uchis a Latin Grammy nominee when it was up for Record of the Year.

It debuted at number 32 on the Billboard 200 and entered the R&B/hip-hop chart at number four.

The EP To Feel Alive arrived in April 2020 and included the song "i want war (BUT I NEED PEACE)," and later that year she released her first Spanish-language LP, Sin Miedo (Del Amor y Otros Demonios).

The album featured the advance singles "Aquí Yo Mando" with Rico Nasty and "La Luz" with Jhay Cortez, as well as the subsequent hit track "Fue Mejor," offered in collaboration with PartyNextDoor.