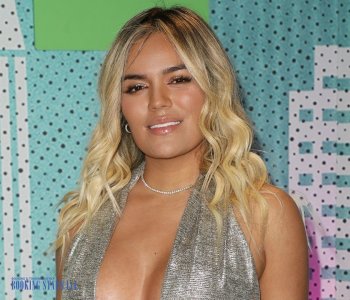 Karol G - Carolina Giraldo Navarro (born February 14, 1991) is a Colombian singer and songwriter in the reggaeton style, winner of the Grammy Latino, performs under the stage name "Karol G" (Carol G.). Her compositions "Ahora Me Llama", "Mi Cama" and "Culpables" in the USA hit the TOP-10 of the Billboard Latino chart.

As a child, Carolina took part in the X-Factor talent show. She studied music at the University of Antioquia, then moved to New York to pursue a musical career. She began using the stage name Carol G. in 2006.

Karol G became famous in 2013 with the song "Amor De Dos", which she recorded in a duet with Puerto Rican singer Nicky Jam. The video has been viewed over 100 million times on YouTube.

In 2014, the singer recorded the song "Mañana" with Colombian reggaeton performer Andy Rivera, which also received 90 million views on YouTube.

In 2017, Carol G recorded a joint single with Bad Bunny titled "Ahora Me Llama". It went viral and has over 760 million views on YouTube. In the same year she released the song "A Ella", which became popular in Colombia.

In April 2019, the singer became engaged to the Puerto Rican rapper Anuel AA. (Anuel AA). The romance between the artists began after they starred together in the video "Culpables", extremely successful (760 million views on YouTube).

For the release of her second album, Ocean, Carol G also directed the spectacular music video for Tusa with Nicki Minaj.