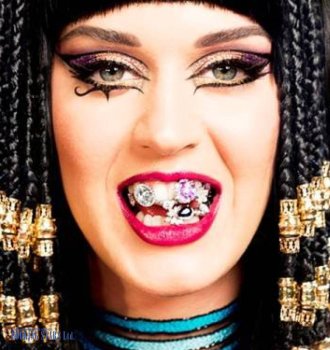 Katy Perry was born October 25, 1984, in California. She is a famous singer and songwriter mostly known for such hits as “I Kissed a Girl”, “California Curls”, “Teenage Dream”, “Last Friday Night”, and “Part of Me”. She holds numerous awards including four Guinness World Records and one BRIT award.

Katy Perry was the second child in the pastor family. She graduated from Dos Pueblos high school in 2003 and moved to Los Angeles. Katy changed her name using the maiden name of her mother because her real name Katheryn Hudson sounds too close to the actress’ name Kate Hudson. Perry was a big fan of such groups as Nirvana, Queen, Heart, Incubus, as well as Alanis Morissette.

In 2001, Katy released her first album Katy Hudson. The genre of the album was Christian gospel. It failed to get into any charts.

In 2004, Perry joined The Matrix, which was nominated for a Grammy. Over the first years of her career, Perry worked with such artists as Shakira, Korn, and Avril Lavigne.

In 2007, Perry signed a contract with Columbia records and recorded her debut EP Ur So Gay, which was criticized for its homophobic nature.

The long-awaited fame came to Perry when she recorded her first studio album One of the Boys (2008). Two months earlier, she released her first single “I Kissed a Girl”. Both the LP and the single were extremely successful and topped many charts including Billboard Hot 100. The same year Katy released her second single “Hot n Cold”. It reached the 3rd spot on Billboard Hot 100 and 7th on the UK Singles Chart. The album was certified platinum.

In 2010, Perry released a single together with Snoop Dogg “California Gurls”. The song sold 5.8 million copies in the USA and was downloaded 8 million times. The same year she released a new album Teenage Dream, which immediately topped the charts in the USA, UK, Canada and many other countries.

In 2011, Katy became the first singer, whose 5 singles from 1 LP topped Billboard Pop Sings chart. It happened for the first time in 19 years.

In 2013, Perry released her fourth album Prism, which was just as successful as her previous work. Katy continues to work on her music and gives live concerts.