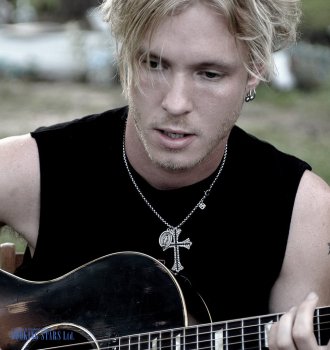 Kenny Wayne Shepherd was born on June 12, 1977, in Louisiana. He is a singer and songwriter. Shepherd is mostly famous for such hits as “Slow Ride”, “Blue on Back”, and “In 2 Deep”. He holds a variety of awards, including 2 Billboard Music Award. Shepherd was nominated for Grammy Awards 5 times.

Kenny started playing the guitar when he was just 7 years old. The boy kept asking his father to buy the instrument until he agreed. Shepherd’s father worked as a producer at a local club and on the radio. When Kenny was 13, he performed at the New Orleans music festival. At 14, he was already part of his own blues band.

In 1993, Kenny joined a music project Jewel Spotlights the Blues Vol. I&II. He added the guitar sound to the famous blues songs, such as Willy Dickson’s “Sex Appeal” and “New Way of Love”.
When Kenny finished high school, he didn’t even think about college. The musician decided to conquer the music industry. He created a band and started giving concerts. Just a year and a half later, 18-year-old Kenny was autographing his first album Ledbetter Heights. The LP was a big success. It topped the Billboard Blues Chart, reached the 108th spot on Billboard 108, and was certified platinum in the USA.

In the summer of 1996, The Kenny Wayne Shepherd Band played at the opening of the legendary group Eagles.

In 1997, Shepherd released his second album Trouble Is…The LP topped the Billboard Blues Chart and reached the 74th spot on Billboard 200. After the release of the album, Shepherd was nominated for a Grammy Award. Two years later, he released another album Live On, which was just as successful. Then Kenny went on a 5-year break.

In 2004, he released his fourth studio album The Place You’re In. The LP wasn’t as popular as his previous work, but Kenny didn’t give up. He released 4 more albums, the latest to date being Lay It On Down (2017). All of them received high ratings in the charts. Kenny is married to the oldest daughter of Mel Gibson. They have 5 children. Shepherd continues to write new music and performs live.