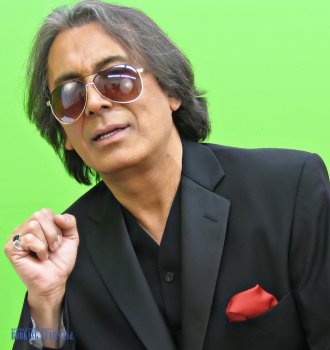 King Clave (real name Jorge Ayala) was born in the northeast of Argentina in the city Formosa on February 14, 1944. His parents Ciriaco Ayala and Victoria Barrios worked in show business. When he turned 14, Jorge decided to leave home and took a train to Buenos Aires. The boy didn’t even have enough money for a ticket, but it didn’t bother him. It was a fun adventure shared with three of his friends. Four young men had to live on the outskirts, where one of them had relatives. In order to earn at least some money, they had to work at a refrigerator factory.

After about a year, Jorge earned enough money to rent a more or less normal room in Buenos Aires. He also bought a guitar. When the young man had some free time after working at a cardboard factory, he learned how to play the instrument. One of the factory owners found out about his passion and helped Jorge meet with a producer Jorge Marchesini, who invited him to sing at his TV show Sábados de mar y sierra de la Ciudad de Mar del Plata. That day, Jorge realized that he wanted to become a professional musician. He started devoting all his free time to studying.

In 1973, Jorge was invited to the TV show "Sábado Sensacional de Amador Bendayan" (Sensational Saturdays with Amador Bendayan).After giving a performance there, Jorge decided to become his own producer and recorded his debut album Los hombres no deben llorar. The LP turned out to be very successful. Jorge quit his job and was free to spend all his time following his dream.

In 1975, the musician was invited to Mexico to participate in the show Siempre en Domingo. He was receiving more and more invitations to different shows and music events. His popularity was blooming. It was tough to book King Clave for any event due to his very busy schedule. He gave many concerts while managing to record 1 to 2 albums per year.

Jorge performed at the best concert halls on the planet, including Madison Square Garden in New York and Olympia in Paris. He gave concerts in Spain, France, Japan, Canada, USA, Australia, and Mexico.

Between 1984 and 1988, Ayala was a vice president and then a board member of SADAIC (Argentina Society of Authors and Composers).

In 1986, he took a break to spend time with his family. A year later, he came back to the music world and recorded eight more albums.

In 2001, together with his wife and son, Jorge moved to the USA, where he continued working. The same year, he gave a concert in Hollywood, which was attended by more than 4,000 fans.

In 2010, for the first time in many years, King Clave visited Central America. In 2012, he founded his own recording company.

Jorge continues working in the USA. He gives concerts all over the world, including Europe, Australia, and Mexico. Even though King Clave’s peak of popularity was in the 1970’s and 1980’s, he still has fans in many countries.