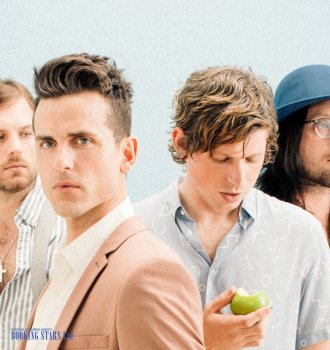 The rock group Kings of Leon was formed in Tennessee in 1999. The current lineup includes Caleb, Jared, Matthew, and Nathan Followill. All of the group members are brothers, except Matthew, who is their cousin. The band is mostly famous for such hits as “Sex on Fire”, “Use Somebody”, and “Radioactive”.

When they were children, the band members had to move around a lot since their father was a traveling preacher. After he settled down in 1998, the boys decided to form their own band. They called themselves Kings of Leon in honor of their father and grandfather, both of which bore the name Leon. In a fairly short time, the musicians recorded an EP Holly Roller Novocaine (2003). Four songs from that album were included into LP Youth & Young Manhood, which was released the same year. The themes for the songs were taken from the Bible.

The group gained popularity rather fast. The critics appreciated their raw style, long hair, and prominent mustaches. They sounded like good old rock and roll. The band became a certain reminder of the past. The LP was released in the UK and the USA and was more warmly received by the British audience.

Kings of Leon managed to take advantage of the moment when playing pure rock became popular. Many fans were attracted by the musicians’ past, which included religious upbringing and lack of education.

In 2004, Kings of Leon released their second album Aha Shake Heartbreak, which was a big hit, selling over 1 million copies worldwide and reaching the 3rd spot on UK Albums Chart. The single from that album “Bucket” was very successful in the UK.

In 2007, the band released their third album Because of the Times, which topped the UK Singles chart and received platinum certifications in many countries.

In 2008, the band released Only by The Night, which became a huge international hit, selling over 6 million copies worldwide and topping various charts. It was their first LP to reach the top-10 of Billboard 200.

The band released 3 more albums, the latest one being WALLS (2016). All of them were a big success, topping a variety of charts and receiving platinum certifications. Kings of Leon continue to record music and perform live.