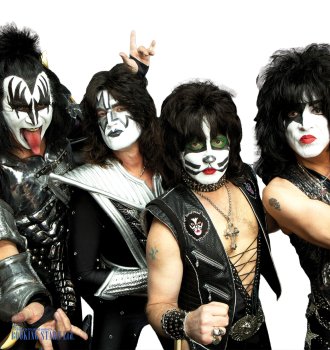 The rock band Kiss for formed in New York, in 1973. The current lineup includes Paul Stanley, Gene Simmons, Eric Singer, and Tommy Thayer. The band holds several awards, including two Classic Rock Roll of Honor Awards. Kiss is mostly famous for such hits as “Rock and Roll All Nite”, “I Was Made for Lovin’ You”, and “Tears Are Falling”.

Kiss (also written as KISS) started performing at local clubs and concerts. At one of these concerts, they were noticed by Bill Aucoin, who got them a deal with Casablanca Records. In 1974, the band released two albums, which were failures. The third album Dressed to Kill (1975) was slightly more popular and even earned a golden certification in the USA.

In 1975, the band released their first live album Alive!, which was a big hit, reaching high spots on Billboard 200, ARIA charts, as well as German and UK Albums Charts. The band was becoming popular thanks to their unusual appearance. Bright makeup, scandalous costumes, and pyrotechnical special effects were very effective and brought the band international popularity.

The next albums Destroyer (1975), Rock and Roll Over (1976) and Alive II (1977) received platinum certifications. They confirmed the international popularity of KISS. By 1977, the Gallup poll showed that KISS was the most popular group in the USA. They became a marketing dream. Kiss makeup, table games, and other souvenirs were selling like hotcakes. Their fan club called Kiss Army included over a million members.

In 1978, each of the group members released a solo album. This was an unprecedented move. At that time, the number of discs with the KISS albums was overwhelming music store shelves. The number of their albums in the stores was bigger than for any other artist in music history.

By 1983, the band’s popularity started to wane. They needed to do something drastic to get it back. So the group members removed their makeup on MTV for the first time in 10 years. In 1984, they released Animalize, which was impressing successful, reaching high spots on the charts and receiving platinum certification.

The band continued recording hit albums. As of today, they released 20 studio albums, 8 live albums, and 13 compilation albums. Even though they are not as popular as in 1970’s and 1980’s, the band is still going strong.