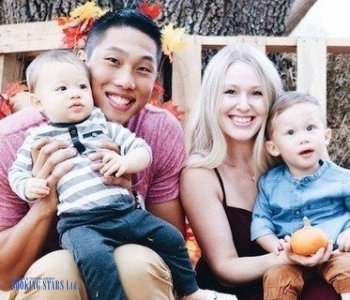 Khoa Nguyen was born on November 20, 1991, in Gulfport, Mississippi, to Vietnamese immigrants. He has a sister. His parents parted ways at some point after he was born and he was raised primarily by his mother. He grew up in Florida and attended school there. During his freshman year, he became acquainted with Swanson. They fell for each other almost instantaneously and it was not long after that they professed their love for each other. However, over the course of the next few years, they broke up several times only to get back together each time. According to Swanson, Nguyen’s female friends did not particularly like her in the beginning. They were older than her as Nguyen himself is a year older than her. While she now has better relationships with all of Khoa’s friends, it was quite rough for her at the time.
After graduating from high school, Nguyen and Swanson moved in together. They rented an apartment right next to their campus. They both attended the University of Central Florida. He enrolled in 2010 to pursue an associate’s degree in business administration and management. He graduated in 2012. From 2010 to 2013, he also attended Valencia College in Orlando, Florida and earned an associate’s degree from there in business, management, marketing, and related support services.
During this period, Swanson became pregnant for the first time. They had not planned for the child and she suffered a miscarriage eight or nine weeks later. It absolutely devastated the couple. However, they decided that they should try again, but this time, with proper planning. Their oldest son, Jackson, was born on September 26, 2015.
While Swanson was pregnant with Jackson an incident occurred that soured the relationship between Nguyen’s mother and the couple. They were staying with his mother and her boyfriend at the time. On one morning, Nguyen’s mother began knocking on his and Swanson’s door loudly. He was already out of the house and she was asking Swanson if she had the keys to his car. He had apparently left it on the driveway and it needed to be moved. Swanson subsequently called Nguyen, asking him to speak to his mother. The situation escalated from there and Nguyen and his pregnant girlfriend ended up being thrown out of his mother’s house. She later refused to give him more responsibilities at her restaurant, which would have enabled him to earn more money, saying that he was irresponsible. When Swanson protested against this treatment of her boyfriend, Nguyen’s mother fired her. Their relationship has not improved since.
Besides Jackson, Nguyen and Swanson have two more children. Landon was born on January 31, 2017, whereas Sutton was born on August 16, 2018. At present, the family resides in Orlando, Florida.
Nguyen and Swanson have been together for over a decade. On December 6, 2014, he proposed to her with a ring he had bought from Craigslist.com. In December 2017, he proposed a second time, but on this occasion, he gave her an actual ring.