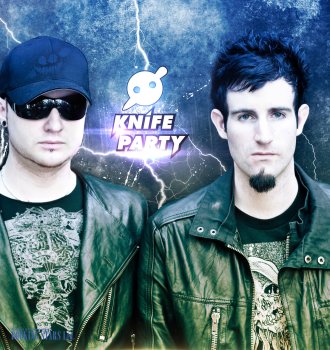 Electronic dance music duo Knife Pary was formed in Australia in 2011. It consists of Rob Swire and Gareth McGrillen, who used to be part of Pendulum band. The duo is particularly famous for their single “Antidote”, which reached the 4th spot on the UK Singles Chart.

The project Knife Party was announced at the beginning of summer 2011. The first remix by Rob and Gareth to the track “Save The World’ Swedish House Mafia” appeared online in June 2011. The song was released later as part of the compilation album Save the World (Remixes).

In August 2011, Swire and McGrillen performed live for the first time as part of a DJ set on Ibiza. During that time they still worked closely with Pendulum and were on a festival tour with the band. Once the tour was over, the young men started spending more time on the Knife Party project.

The band debuted with their first EP 100 % Modern Talking in December 2011. The EP included such songs as “Internet Friend”, “Destroy Them With Lasers”, and “Tourniquet”. The EP reached the 31st spot on the ARIA Charts.

The biggest breakthrough of 2011 was the song “Antidote”. It received three platinum and one golden certification. Even though it reached just the 100th spot on the ARIA chart, the single conquered the UK.

In 2012, the band released another EP Rage Valley. It made its way to the 95th spot of ARIA charts and the 75th spot of Billboard 200.

In 2013, the duo released their third EP Haunted House, which managed to top US Dance Billboard Chart.

The duo released two more EPs, the latest one to date being Battle Sirens (2016). Rob and Gareth travel all over the world and take part in various music festivals.