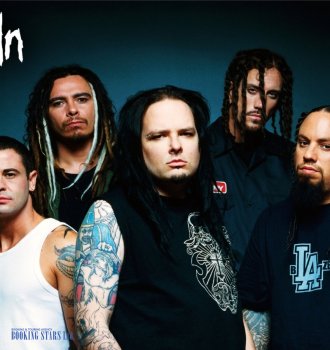 The nu metal band Korn was formed in California, in 1973. The current lineup includes Jonathan Davis, James Shaffer, Reginald Arvizu, Brian Welch, and Ray Luzier. The band holds a variety of awards, including two Grammies. They are mostly famous for such songs as “Here to Stay”, “Did My Time”, and “Coming Undone”.

The band was formed when the guitarists from the group L.A.P.D. James Schaffer and Brian Welch went to the Sex Art concert, where they heard the vocalist Jonathan Davis. They decided to start their own project and in 1994 recorded their first demo album Neidermeyers Mind. It resulted in a contract with Epic. The same year, the band released their first studio album Korn. The LP was a big hit eventually receiving many platinum certifications in various countries. After the release, the band went on a tour.

The band managed to play with Ozzy Osborne, Biohazard, House of Pain, Megadeth and Danzig. They were becoming more and more popular and soon their album sold over 2 million copies.
After two years of touring, Korn came back to the studio and recorded their second LP Life Is Peachy. It reached the 3rd spot on Billboard 200 and sold over 2 million copies. When touring in support of the LP, Korn performed with Metallica and Marilyn Manson. The same year, they recorded a soundtrack to the movie The Crow: City of Angels.

In 1997, the band members established their own recording label Eleme. The same year, they went on a British tour, where an opening act for played by Limp Bizkit and Helmet.

The next album Issues (1999) was just as successful as Follow the Leader. The band was at the peak of their popularity. They released 8 more albums, the latest one to date being The Serenity of Suffering (2016), while the albums weren’t topping the charts anymore, they were still getting into the top-10. The band continues to write new songs and performs live.