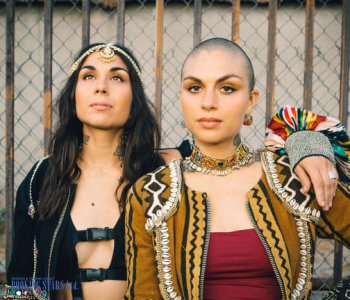 Krewella – EDM duo from the USA

Krewella is a duo of two sisters, Yasmin and Jahan Yousaf. The name for the band was borrowed from the main character of the movie 101 Dalmatians, Cruella de Vil. The group appeared in 2007. Initially, it was a trio. The third member was a DJ and producer Kris Trindl. He left Krewella in 2014.

Yasmin, Jagan, and Kris met when they were still in high school. Soon, they decided to form a band. The group’s music includes dubstep, electro house, and other EDM directions. All band members have the same tattoo (6-8-10), which signifies the date they dropped out of school to pursue a career in music.

In December 2011, the artists signed a contract with Monstercat and presented a debut single, "Killin' It". The label did an excellent job promoting the song on social media and YouTube channels that focus on EDM music.

After the first releases, the young group was invited to headline several large EDM festivals, among which were Stereosonic, Electric Daisy Carnival, Ultra Music Festival, Spring Awakening, and many others. In 2012, after giving numerous performances, the band earned an award at International Dance Music Award as Best Breakthrough Artist.

When performing at Ultra Music Festival in 2013, musicians managed to acquire numerous positive reviews from Billboard’s critics. Many of them promised the band a bright future. In September 2013, the trip presented a debut LP, Get Wet, which came in 8th on Billboard 200 and topped Top Dance/Electronic Albums Chart. The same year, the artists joined Cash Cash to record a new single, "Live For The Night".

In 2014, together with EDM Lifestyle, Krewella created a designer bracelet. The proceeds from selling it were donated to Dance For Paralysis.

In September 2014, Kris left the band. In November, the duo released a new song, "Say Goodbye". The single’s lyrics talked about the loss of a group and a lawsuit, which Kris Trindl initiated because he thought that he was unfairly pushed out of the band.

In March 2015, Yasmine and Jahan recorded a successful single, "Somewhere to Run". Its producers were Don Gilmore and Pegboard Neds. In the summer, they presented a new DJ mix "Troll mix Vol. 14 – Return of the Trolls". It was the first mix recorded without Trindl. It lasted an hour and featured a new track, "Surrender the Throne", and a remix of "Somewhere to Run".

Sisters worked on the track “Love Song to the Earth”, which was recorded with Jon Bon Jovi, Paul McCartney, Colbie Caillat, Angelique Kidjo, and many other famous artists. In August 2015, the artists announced that the lawsuit with Trindl was settled without going to court. Even though the terms weren’t revealed, both parties seemed to be happy with the outcome.

In 2016, Krewella recorded an EP, Ammunition. After the release, the sisters embarked on a tour to support the album. The EP featured several successful tracks, including "Louder Than Bombs", "Broken Record", "Helter Skelter", "Beggars" with Diskord, "Friends", and "Superstar" with Pegboard Nerds and NGHTMRE.

The same year, the band filmed a music video for the single “Beggars”, which became popular on YouTube. A week before Ammunition’s release, the artists presented "Broken Record". In May, they filmed a music video for "Love, Yazzy", in which one of the sisters talked about the beginning of the group’s work. The latest EP to date was released in 2017. New World (Part 1) came out with the support of Mixed Kids.