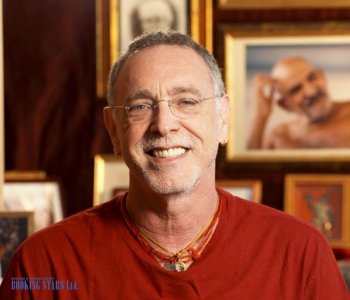 Known for blending Hindu devotional music with contemporary Western influences, American singer Krishna Das (b. Jeffrey Kagel) is widely recognized for bringing the traditional kirta chant to a global stage. The founder of Triloka Records, the Long Island-born Das developed connections to Indian spirituality in his early twenties. Having grown up on jazz, blues, and rock & roll, Das was working as a school bus driver when friends inspired him to visit spiritual leader Ram Dass in 1968. Driving six hours through snow, Das arrived at his destination in New Hampshire. Although he only visited with Ram Dass for a few hours, the experience completely altered the course of his life. Two years later, Das traveled to northern India, where he spent two years studying under Guru Mahara-ji (Neem Karoli Baba). Returning to the U.S. in 1972, Das devoted himself to the ancient tradition of Bhakti yoga (Yoga of Devotion) and the spiritual chant known as kirtan.

In 1990, Das founded Triloka Records, a label that soon became a leading distributor of world music recordings from artists like Jai Uttal, Ali Akbar Khan, and jazz great Jackie McLean. His own debut album, One Track Heart, released in 1996, focused on updated Bhakti yoga chants. His 1998 follow-up, Pilgrim Heart, featured a guest appearance by Sting, the first of numerous pop artists with whom he would eventually collaborate. Over the coming decade, Das produced a prolific amount of music, from the Rick Rubin-produced Breath of the Heart and Door of Faith albums to 2007's Gathering in the Light, a collaborative album with composer and overtone singer Baird Hersey and the choir Prana. In addition to his studio albums, Das has released a number of live recordings, including 2012's Grammy-nominated Live Ananda. Released in 2014, Kirtan Wallah found the singer further embracing his American rock roots in a unique musical pairing. Following the 2015 anthology Laughing at the Moon: A Collection of Classics 1996-2005, Das returned with his 15th studio album, Trust in the Heart, in October 2017.