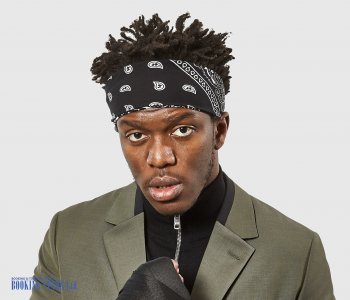 KSI, whose real name is Olajide Olayinka Williams Olatunji, is one of the most well-known British internet personalities. Since 2009, KSI has produced widely popular gaming and vlog content for his YouTube channel, expanding into a career as a professional rapper, musician, and author in 2015. In 2018, he began training to be an amateur and professional boxer, culminating in high-profile fights against YouTube personality Logan Paul in 2018 and 2019.

To this day, KSI remains one of YouTube’s most prominent renaissance men, churning out top-notch content both as an individual creator and as a member of the Sidemen, a collective of British YouTubers that he co-founded. His name comes from the name of a prominent Halo clan that KSI joined as a teenager, and stands for “Knowledge, Strength, Integrity.” Nowadays, of course, KSI is much more well-known than his eponymous Halo clan, though the clan is still active.

The son of Olajide Olatunji and Olayinka Olatunji, KSI was born and raised in the city of Watford, Hertfordshire, in the UK. Before dropping out of school to focus on his YouTube career, he attended Berkhamsted School in Berkhamsted, Hertfordshire. He lived with his parents in Watford as he began his YouTube career, but has since moved and currently lives with fellow Sidemen member Simon Minter in central London.

KSI’s younger brother, Oladeji Daniel “Deji” Olatunji, is also a YouTube personality. Though the brothers’ relationship has not always been without friction, they occasionally collaborate for content; in KSI’s first boxing match against Logan Paul, the undercard event was a fight between Deji and Paul’s younger brother, Jake Paul.

Although KSI likes to keep his personal life separate from his career as an online personality, he has occasionally opened up about his relationship with his girlfriend, who he met on Tinder. In the past, he has been (slightly) more open about his other relationships, such as a two-year relationship with former YouTuber Seana Cuthbert and a relationship in 2017 with a woman named Lois Sharpe.

KSI made his first YouTube account, “JideJunior,” in 2008, and started his current YouTube channel, under the name “KSIOlajideBT,” on July 24, 2009. At first, he built up a small-but-loyal following by uploading gaming commentary videos related to the FIFA series. Within a few years, he had expanded into vlog-style videos and other video game series, becoming the fifth-most subscribed user on YouTube by the end of 2013. As his YouTube career took off, KSI dropped out of sixth form college—the UK’s equivalent of high school—to pursue content creation full-time when he realized that he was generating more income than one of his teachers.

In October 2013, KSI and a team of four other British YouTubers founded the Sidemen, eventually bringing on two other members to make the group a team of seven.

KSI had dabbled with music since early in his career, producing parody rap songs for his YouTube channel since 2011, but in 2015, he transitioned into a serious music career with his debut song, “Lamborghini,” released on March 23 of that year. After the success of “Lamborghini,” which charted at number 30 on the UK Singles Chart, KSI was signed by Island Records; he released four EPs with the label before parting ways with Island Records in 2017. He has since signed with American independent record label RBC Records, releasing a studio album, Dissimulation, and touring internationally to promote his music.

KSI’s most recent single, “Really Love,” which features Craig David and Digital Farm Animals, was released on October 23, 2020. It’s the first single from his upcoming studio album, which will be released in 2021.