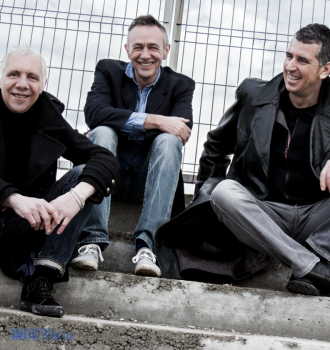 The band La Unión appeared in 1982 in Madrid. It was formed by the singer Rafa Sanchez, guitarist Mario Martinez, and bassist Luis Bolin. The producers of the group were Nacho Kano and Rafael Abitbol.

The band conquered the big stage with their classic song “Man-Wolf In Paris”, based on two novels by Boris Vian. They presented it in 1984 in Madrid with the music video. It sold more than 200,000 copies, being the number one in sales for three months and getting a gold certification.

On the wave of success, they released the first LP Mil Siluetas, which contained great stories full of mystery and fantasy. The following year, they recorded the LP El maldito viento. It included some of the best hits of the band such as “Between Rare Flowers” and “Tall and Leafy”.

In the third LP 4×4, La Unión collected all their best songs of that period. They enriched their music with new rhythms and electro-acoustic mixes. Soon La Unión embarked on their first American tour.

After deciding to pursue a solo career, Inigo Zabala left the band in 1988. Despite it, the group continued touring as a trio and released a new LP Vivir al ester del Eden. This tour made La Unión one of the key players on the rock music arena.

In the 90’s, they released LP Tentacion with such popular songs as “Berlin” and “She's a Volcano”.

After the concert in La Corunna in 1992, La Unión released a live album Tren de largo recorido with two hours of live video and an amazing song mix.

The following year, La Unión released several LPs and gave a lot of concerts. LP El mar de la fertilidad was a step back to the style they used to in the 80’s.

La Unión is practically the only band that still plays Madrid rock and goes on tours nowadays. Instead of music style changes, the group continues to produce high-quality music.

Nowadays the band gives a lot of concerts and goes on many tours. Many clubs and organizations strive to book La Union for their events.