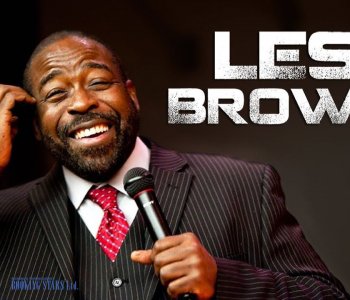 Les Brown is a former American politician, television host and radio DJ, and recognised as one of the world’s greatest motivational speakers.

Over the last four decades he has transformed numerous lives with his speeches relating to almost every aspect of life.

He grabbed attention as a member of the ‘Ohio House of Representatives’ and later went on to host his own show called ‘The Les Brown Show’ where he taught people to follow their dreams and reiterate the phrase “it’s possible”, emphasising on the need to seek solutions rather than ponder over problems.

In an interview, Les Brown stated that television for him is simply a means to empower masses.

With no formal education beyond high school backing his dreams, he still went on to establish his own company called ‘Les Brown Unlimited, Inc.’ and is also the author of the best-selling book ‘Live Your Dreams’.

Throughout his career, he has interviewed some of the brightest minds of the business world and has worked closely with them in the boardroom. He has earned several accolades as an orator and isnow referredto as “The Motivator”. Leslie Calvin Brown was born a twin along with his brother Wesley on 17th February, 1945 at a dilapidated building in Liberty City, Miami.

Leslie and his brother were conceived by an extra marital affair of their biological mother.

Upon conceiving them, their mother quietly visited Florida to give birth in secrecy and within three weeks she put them for adaption.

When both brothers were six weeks old, they were adopted by a 38 year old generous spinster, Mamie Brown who worked in a coffee shop.

He attended formal school along with his sibling but on reaching grade five, his teachers considered him a misfit and mentally slow in comparison with other children, as he was more inclined towards seeking attention and was a poor student.

He began to believe the opinions of his teachers and considered himself a slow student, but his adoptive mother thought otherwise.

His mother and one of his high school teachers recognised his potential and owing to their guidance, he was able to muster an ambition for his life. On passing high school, he never stopped learning and continued to educate himself.