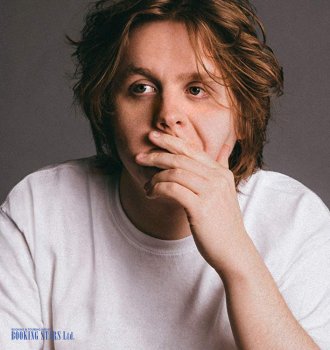 Lewis Capaldi is a singer and songwriter from Scotland. He was born on 7 October 1996 in Whitburn. The artist earned international popularity with his single “Someone You Loved” in 2018. The song topped the British chart and became a hit in many countries.

Lewis became interested in music rather early. When he was just nine years old, the rising star learned how to play the guitar, which helped him on his way to success. By 12, the young musician started performing in local bars. During that period, Capaldi decided that he wanted to become a professional musician.

The first popularity came to Capaldi in 2017 after the release of the first EP, Bloom. However, the musician didn’t become successful right away. He didn’t have enough money to record songs in a professional studio so he was doing all he could at home and uploading songs to the Internet. After some time, Lewis was noticed by manager Ryan Walter, who decided to help the young artist on his way to popularity. Walter helped Lewis record a debut single “Bruises”, which became popular immediately. Very soon after the release, the music video was watched over 28 million times. It was a record for the modern music industry. Many organizers started trying to book Lewis Capaldi for private events.

Lewis became the first artist, who managed to record such a popular single without a contract with a label. As of today, the song has over 38 million views on YouTube. Many fans were surprised at how deep and touching the young man’s singing was when he was talking about lost love.

Lewis Capaldi’s songs took up a special niche. He created heartfelt and sincere indie pop with a touch of folk music. The calling card of the young singer is his powerful and slightly husky voice.

Lewis became famous in other countries after BBC added him to its annual list of promising musicians, Sound of 2018. Many famous artists used to be part of that list, including HAIM, Sam Smith, Adele, and Ellie Goulding. In 2017, Capaldi went on his first tour with Rag'n'Bone Man. A year later, he toured with Sam Smith.

When Lewis Capaldi’s debut single became a huge success, he immediately attracted the attention of numerous labels. He eventually signed contracts with Virgin EMI Records and Capitol Records. After a European tour with Sam Smith, Lewis embarked on his own tour of the UK.

In 2018, Lewis attended such summer music festivals as Osheaga, Bonnaroo, Lollapalooza, Reading & Leeds Festival, and others. He also recorded several more popular songs, such as "Tough", "Breach", "Grace", and "Something Borrowed". The tickets to Capaldi’s UK tour sold out even before he presented the debut LP.

Before its official release in 2017, the debut EP, Bloom, came in second on the iTunes chart. The songs in the EP were filled with love and pain. The melodies were highly emotional and conquered the hearts of many fans.

The second EP, Breach, which Lewis released in 2018 made him even more popular. The single “Someone You Loved” made it into the top-10 of British charts. It also became very successful in Sweden, Belgium, and Norway. The famous actor Peter Dougan Capaldi appeared in the music video for "Someone You Loved". He is Lewis’ distant relative, most famous for his starring role in the British TV series, Doctor Who.

In 2019, Capaldi was nominated for Brit Critics' Choice Award together with Mahalia and Sam Fender, who eventually won the prize. The same year, Lewis presented his long awaited debut LP, Divinely Uninspired to a Hellish Extent with the assistance of Virgin EMI Records. It topped the charts in the UK and Ireland and became the most sold album of the year. It took the LP one week to get gold status.

The album was the most sold LP in the UK for the past eight years. It also made it into the American chart Billboard 200 and settled on the 49th position.