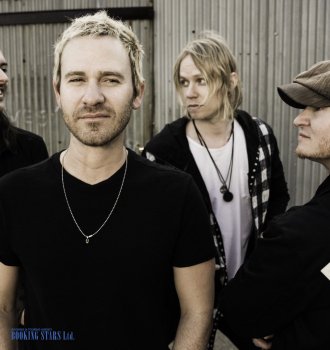 The rock band Lifehouse was formed in Los Angeles, in 1999. The current lineup includes Jason Wade, Rick Woolstenhulme, Jr., and Bryce Soderberg. They are mostly famous for such hits as “Hanging By A Moment”, “You and Me”, and “Broken”.

The future lead vocalist of Lifehouse Jason Wade (born July 5, 1980) started writing poetry when he was just 12 years old. Some time later, he wrote music and the lyrics turned into songs. When he was 17, Jason met Sergio Andrade. They started playing basketball together and then turned to creating music. Jason was a composer, vocalist, and guitarist while Sergio worked with bass and drums. Soon they met Rick Woolstenhulme, who became responsible for drums and percussions.

The band started playing at school concerts and local cafes. That’s when they caught the attention of a producer Ron Aniello. He invited the musicians to his studio to make several records. However, Ron thought that the band wasn’t ready to record a full-blown LP. He waited until they developed their talent well enough for becoming famous.

When Jason wrote a new song called “Breathing”, Ron was so impressed that he decided the time for fame has come. Lifehouse signed a deal with DreamWorks Records and in 1998, recorded their first official demo album.

Two years later, the band released the first studio album, No Name Face. The LP reached the 6th spot on Billboard 200 and sold over 2.5 million copies worldwide. The single from that album “Hanging By the Moment” was a huge hit. It was certified platinum by ARIA, topped Billboard charts and brought the band international recognition. The single won a Billboard Music Award as the Hot 100 Single of the Year. Lifehouse moved from nightclubs to bigger stages.

The band went on to record 6 more studio albums, the latest one to date being Out of the Wasteland (2015). Even though Lifehouse’s later albums weren’t as successful as their early work, they still reached high positions on the charts. The band members continue to work on their music career and perform live.