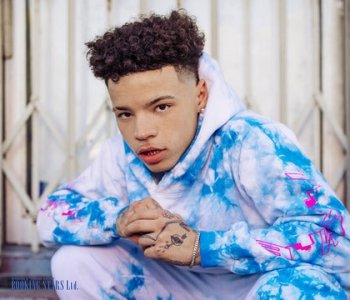 At the moment it is part of the American label "Interscope Records".

Latan was fond of singing from an early age and often showed his talent to parents and friends. The little boy began to show his vocal abilities long before he began to seriously think about a career as a musician. At first it was just fun, re-singing commercials, favorite songs from cartoons and hits that were often broadcast on TV. True, after a while Latan realized that music for him is something completely different and expensive. He was always pleased to imagine that soon he will be able to take possession of the musical world with his own music, which has become for him the only meaning in life.

It was the thoughts of a better future in the musical field that could lead him to the moment of action, when the guy began to compose music on his own, in order to provide it to the whole world in a short time.

The very first musical project of Lathan, which after it established itself as the debut of a young and talented singer, was a single called "Pull Up". After the release of this song, the listeners did not keep themselves waiting and in the end they just watched the video of the song almost to the holes. Thanks to this interest from the people, the video was able to earn about 11 million views. Around the end of July 2018, the young guy was able to release another track called "Noticed" along with a music video directed by Cole Bennett. This clip shows the luxurious life of rich teenagers who are resting in expensive apartments, which overlook the most beautiful Californian beach.

Almost nothing is known about the relationship of the growing star, only one thing is clear that at the moment the guy is completely devoting himself to a career, which in just a few months was able to take such incredible turns.

Latan is a student at Mountlake Terrace High School.

Lathan began building a fan base through social media platforms such as Instagram and SoundCloud.