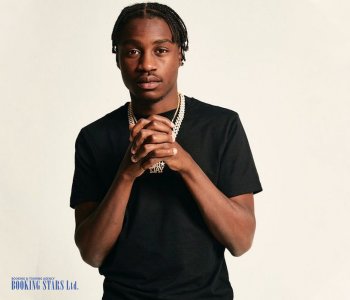 Lil Tjay - Tion Dalyan Merritt is an American rapper who is known to the general public as Lil Tjay. The artist gained popularity after recording the song Pop Out with Polo G. The presented track took 11th position on the Billboard Hot 100 chart.

Compositions Resume and Brothers finally secured the status of the best artist of the last few years for Lil Teejay. Brothers' track has over 44.4 million SoundCloud streams, thanks to which the rapper is signed to Columbia Records.

Tion Dalyan Merritt was born on April 30, 2001 in the Bronx (USA). The childhood of a black guy definitely cannot be called happy. He grew up in a poor family, and the place where Tion's youth took place contributed to the presence of a criminal past in his biography.

The rapper grew up in the South Bronx and he describes his neighborhood as "diverse." Citizens of various nationalities lived there. As a result, Tion mastered several languages ​​at once. In particular, he spoke excellent Spanish

It is known that the guy was brought up in a large family. When Tion was a child, his father left the family. All the chores fell on the shoulders of the mother. When he was a teenager, the guy realized how hard it was for his mother. In search of earnings, Tion turned to the criminal path.

In 2016, at 15, he received his first term. The guy was sentenced to 12 months in prison in a youth pre-trial detention center. Lil has spent this year profitably. He was imbued with writing musical compositions. In an interview with Rolling Stone, the rapper said:

“When I got out of jail, I saw my friends make the same mistakes that I made. After leaving the isolation ward, I clearly realized that I wanted to make money with music. I realized that there is no reason to do business in the area and engage in crime. I can see the motivation that comes from this. Many people look at me like: "Damn, this is the solution" ... ".

At the end of 2017, Lil Tjay promised his family that he would never be involved in crime. Before recording songs in a professional studio, the performer made several tracks on gadgets. Used bars that are designed to work in hip hop style. This is how the path of rapper Lil Tjay began.

When the artist is asked about the artists who influenced the formation of his style, he replies that his passion for hip-hop began with the "mashing" of the songs of the singers Drake and Meek Mill.

The rapper's musical style is an offshoot of another Bronx native - Boogie Wit Da Hoodie. The peak of popularity was in 2016. The performer's success symbolizes how fast rap is developing today and how the style of young artists influences this. Where Boogie tries on the role of a rejected lover, Tjay works in a less defined emotional space.

Tjay is constantly experimenting with sound. For example, on the song None of Your Love, he interpolates Justin Bieber's 2010 hit Baby. The rapper was even accused of attempting to plagiarize. When asked by journalists, Lil shrugged his shoulders, answering: "I just went into a recording studio and wanted to convey the written text by singing, not reading ...".

The rapper's style is often compared to A Boogie wit da Hoodie. And it deserves it. He reads for "brothers", sings for the fairer sex and skillfully adapts to the requirements of radio stations. Leela is described by journalists as the universal soldier of the modern mainstream.

In 2017, the American rapper posts his debut tracks on SoundCloud. Including the famous tracks Resume and Brothers got there.

The musical composition Resume was released when the singer was still 16 years old. The presentation of the track was accompanied by a video featuring Lil Tij.

The artist was lucky enough to sign a contract with Columbia Records after the label noticed his track Brothers. The presented track is filled with pain. In the song, Lil reads about death, imprisonment, and depression.

Lil Tjay presented five musical compositions to fans of his work during the year. The songs have accumulated millions of plays on SoundCloud.

The song Resume has received over 14 million views in just 12 months. The Brothers track has 44.4 million plays on SoundCloud. Other famous hits of that time include the tracks Goat and Leaked.

Since 2018, Lil Tjay has been seen collaborating with producer Cash Money AP on the track None of Your Love. The composition received over 20 million views in less than a year. The song was very warmly received by fans and music critics.