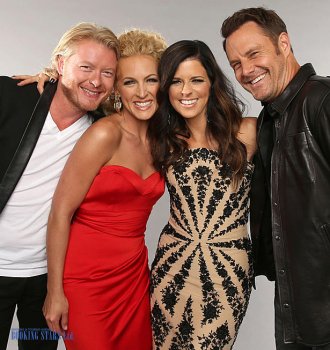 In the mid-1990s, Karen performed with a Christian band Truth. She even wrote several songs for it. Later, the young woman formed a duo with Leigh Cappillino, which they called KarenLeigh. The group released two songs, "Save it For the Rainy Day" and "This Love Has".

In 1997, Fairchild met Kimberly Schlapman when she visited Alabama’s Samford University. The young women moved to Nashville and began working together. In 1998, Westbrook and Sweet joined them. Soon the band, which the musicians called Little Big Town, signed a contract with Mercury Nashville Records. However, it was canceled shortly. But the musicians didn’t give up. In 2001, they performed as back vocalists for recording Collin Raye’s album, Can't Back Down.

In 2002, the band signed a new contract with Monument Records. Soon, they released a debut LP, Little Big Town. The album featured singles "Don't Waste My Time" and "Everything Changes", which came in 33 and 42 on Hot Country Songs chart respectively.

After the album’s release, the band was going through some tough times. Jimmy’s father died. Fairchild divorced. The contract with Monument Records was canceled. The musicians continued giving concerts but kept looking for other jobs.

In 2005, Big Little Town signed a contract with Equity Music Group. The new song "Boondocks" climbed to the ninth spot of the American charts. It was the lead single of the new album, The Road to Here. The second single "Bring It On Home" made it into the top five of Hot Country Songs Chart. The next singles were "A Little More You" and "Good as Gone". They also became big country hits. The album itself went platinum. Many fans wanted to book Little Big Town for private events.

Third LP, A Place to Land, came out with the assistance of Equity label in 2007. The lead single "I'm with the Band" came in 32nd on the Billboard country charts. A year later, the band decided to leave Equity and signed a contract with Capitol Records Nashville. In 2008, the third LP was re-released by the new label with the addition of four new songs.

With Capitol Records, the band released five more LPs, The Reason Why in 2010, Tornado in 2012, Pain Killer in 2014, Wanderlust in 2016, and The Breaker in 2017. All of them reached high spots on the charts. More than 20 singles from these albums made it into Country Airplay and Hot Country Songs Charts. The tracks "Pontoon", "Girl Crush", and "Better Man" topped the charts.

In 2016, the LP Pain Killer was nominated for a Grammy Award as Album of the Year. The single “Girl Crush” earned three nominations. The same year, the band performed the national anthem at the NFC Championship game. On Fourth of July, Little Big Town performed with Boston Pops at an Independence Day concert.

In 2018, the band announced its plans for a six-day tour of the UK with Seth Ennis. The final concert of this tour was arranged in London on 5 October. During the concert, the musicians declared that they would headline C2C: Country to Country festival.

In the summer of 2018, the group recorded a new single, "Summer Fever", which debuted on the 29th position of Country Airplay Chart. Eventually, the song climbed to the top of the chart.

In 2019, the musicians presented a new single “The Daughters”.