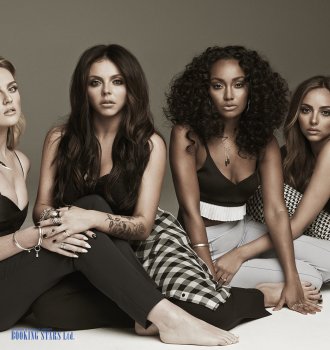 Little Mix was formed in 2011. The group appeared during one of the seasons of the popular British talent show X-Factor. The lineup consists of Jesy Nelson, Jade Thirlwall, Leigh-Anne Pinnock, and Perrie Edwards.

Initially, each one of the girls was planning to participate in the X-Factor by performing solo. However, the judges decided that they would do better as a group. As a result, Little Mix won the contest. After the huge success, during a live broadcast, the four girls agreed to continue working together. It wasn’t a tough decision to make since they were already offered a contract with Syco Music. The success was virtually unavoidable considering the track record of the groups created by Simon Cowell.

In 2012, the band released its first LP, DNA, which featured such hits as "Wings", "DNA", and "Change Your Life". All of them reached high spots on the charts and became commercially successful. The album sold over 450,000 copies in the UK and 200,000 in the USA. It became very popular in Australia and Ireland. After the LP’s release, the fans constantly tried to book Little Mix for their events. However, the young women rarely agreed due to a busy schedule.

The album reached the top-10 on numerous charts, including UK Albums Chart and Billboard 200. It earned a platinum certification in the UK and gold in Australia. The DNA Tour arranged to support the album began in 2013.

In November 2013, the artists released their next LP, Salute. It reached the 4th spot on UK Albums Chart and came in 6th on Billboard 200. A week after the release, the LP sold 40,000 copies. For a long time, the album stayed in the top-10 of the charts in Ireland, Canada, and Australia. The most popular songs featured in the LP were "Move" and "Little Me". These singles appeared on many European radio stations and climbed to high spots on the charts.

A year later, a new LP, Get Weird, came out. It reached the 13th spot on Billboard 200 and came in second on UK Albums and UK Digital Albums Charts. The singles "Black Magic", "Love Me Like You", "Secret Love Song", and "Hair" became big hits. All of them earned a platinum status in the UK and many other countries. The first week after the release, Little Mix’s third album sold 60,000 copies. Eventually, more than 700,000 copies were purchased in the UK.

In 2016, Little Mix released their 4th studio LP, Glory Days. The single "Shout Out to My Ex" became a big hit in Europe. It earned three platinum certifications in Australia and two in the UK. Three more singles “Touch”, “No More Sad Songs”, and “Power” went platinum in the singers’ native country. To support the album, the band went on The Glory Days Tour.

Little Mix has an impressive variety of prestigious awards and nominations. Among them are prizes from Brit Awards, Cosmopolitan Awards, Global Awards, and MTV Video Music Awards.

In February 2018, the young women announced working on their 5th studio album, which is expected to be released at the end of the year. In the summer of 2018, Little Mix went on Summer Hits Tour 2018.