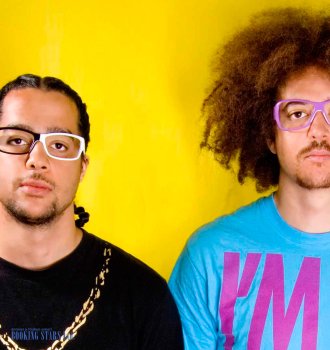 LMFAO is an American band, which was established in 2006. It’s mostly known for such hits as “Party Rock Anthem” and “Sexy and I Know It”. The electronic dance music band holds numerous awards, including Teen Choice, Billboard Music, and MTV movie awards. The lineup consists of Redfoo and SkyBlu, who are uncle and a nephew.

Both Redfoo and SkyBlu grew up in LA. They are the son and a grandson of a famous producer Berry Gordy. Initially, they called the band Sexy Dudes but then changed it to LMFAO, which stands for Laughing My Fucking Ass Off.

In 2008, the duo released a mini album Party Rock, which is released in iTunes store in July. In November, they signed a contract with Interscope.

In 2009, the band released a studio album with the same name as EP. The album reached the 33rd spot on Billboard 200 and 2nd spot on the US Dance Chart. The first single from that album “I’m In Miami Bitch” was released in December 2008 and reached the 51st spot on the Billboard Hot 100 and 37th spot on Canadian Hot 100. The same year DJ Inphinity created a song “Bass Kick in Miami”, which was based on “I’m in Miami Bitch”. The song spread all over the internet very fast and became popular. It was used as a soundtrack in the reality show Kourtney and Khloe take Miami.

In 2010, LMFAO participated in recording David Guetta’s song “Getting Over You”, which became an international hit and got into the top-10 of many charts. It also reached the 31st spot on Billboard Hot 100.

In 2011, the duo recorded their second album Sorry for Party Rocking.The first single from that album “Party Rock Anthem” became the most popular song of the band and topped many charts. Including Billboard Hot 100, UK Singles Chart, ARIA chart, and Canadian Hot 100.

In 2012, the band announced that they are taking a break after 5 years of vigorous work. Since then, they haven’t recorded any new songs.