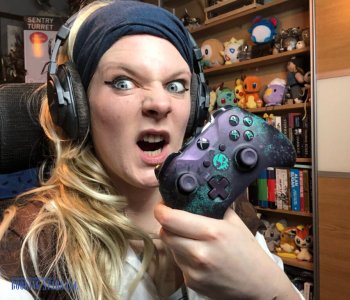 Hannah Rutherford (born: May 25, 1988 [age 32]), better known online as Lomadiah (formerly YodsLomadia or Lomadia), is an English content producer for the Yogscast network. Hannah used to be the Operations Manager for the Yogscast and her main jobs included reading and responding to fan mail and helping Lewis and Simon with video production. Hannah runs the the Yogscast 2 channel as her own and uploads content on a daily basis.

On her channel, you will find lets plays from popular series: Assassins Creed, Far Cry, The Walking Dead, The Sims (YogSims) and Minecraft, specifically Tekkit as well as her "Evicted!" series with Nilesy. She generally enjoys puzzles, adventure and horror games.

As many members of the Yogscast, she also streams actively on Twitch.

Hannah chose the username, "Lomadia," because it means "grace" in Elvish and the name "Hannah" also means grace in Hebrew.
Hannah used to date Yogscast Lewis before breaking up in March 2015 after a 6-year relationship. In late-December of the same year, Hannah noted she had a new boyfriend, who has since been seen/heard in a few livestreams.
Hannah's favorite type of animals are cats and owns a female tabby cat named Libby with her boyfriend. Libby frequently interrupts Hannah during videos and streams.

How much does it cost to book Lomadiah:
Price inquiry
Lomadiah booking agent:
Contact agent
Lomadiah Contacts:
Send Lomadiah a message
« previous next »