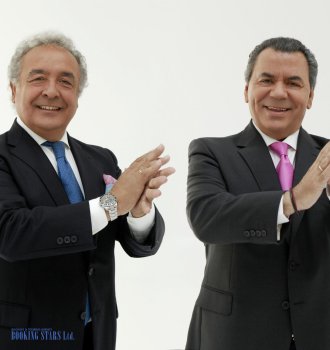 Los Del Rio was formed in Seville, Spain in 1962 by two best friends Antonio Romero Monge and Rafael Ruíz Perdigones. Even though the group recorded over 35 albums and still performs on stage, the world remembers them by one 1996 hit with a resounding name “Macarena”.

In 1966, the duo recorded its first EP, which featured just four songs. It was a live recording of their concert in Seville Theater Vega.

In 1967, the band presented its first studio LP, Luces de Sevilla. It was popular in their native town. Back then, it was fairly easy to book Los Del Rio for a private event in Spain.

In 1969, the duo went on its first tour to Mexico, where it was very popular. A year later, Rafael went to serve in the army and Antonio had to hire other musicians in order to avoid a hiatus in the band’s career.

Musicians released about 11 albums before making it into the world charts. In 1993, they released, A mi me gusta, which reached the 20th position on Billboard’s Top Latin Albums and the 6th position on Latin Pop Albums. This LP featured the original version of the hit song “Macarena”.

At that time, the team worked with Zafiro Records. At first, the single became popular on radio stations, which played mostly Latin songs. Then it appeared in some Spanish music compilations. Eventually, the song made its way to the hands of BMG Latin representatives, who release a remix. The remix was featured in the LP, Macarena Non Stop. The song earned four platinum certifications in the USA. The album itself topped Billboard’s Latin charts.

In 1995, the song became an international hit. Not only Spanish-speaking countries called it a hit, it was a big success in Latin communities all over the world. This way, the single earned immense popularity. The whole world did the dance, which first appeared in the music video to the song performed by Los Del Rio. “Macarena” was translated into several languages. It topped the charts in the USA and Australia. The song reached the second spot on the UK Singles Chart.

“Macarena” was used in Bill Clinton’s election campaign. It was hard to find anyone in the USA Latin communities, who didn’t know the lyrics to this song. The single brought Los Del Rio over 20 awards.

In 1996, the band released another LP, Colores, which didn’t make it into the charts. Over the next 16 years, the duo recorded 16 more albums, none of which managed to repeat its previous success. The last album to date was Vámonos que nos vamos, which came out in 2012.

Even though the band seems to be a “one-hit wonder,” the duo is still very popular all over the world. Los Del Rio gives live concerts and performs at private events.