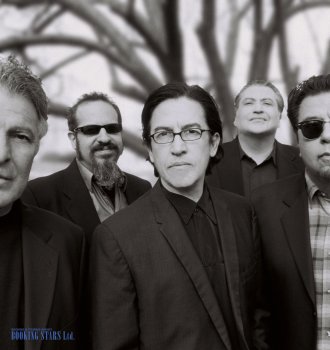 Los Lobos (The Wolves in Spanish) is one of the most unique and original American bands of 1980’s. Their music is multifaceted and versatile. They play a certain mix of rock, Tex-Mex, traditional Spanish and Mexican melodies, country, folk, rhythm and blues, and blues.

The band was formed in 1973 but the debut album with a major label was released only 11 years later. During this time, the band released only a few albums Si Se Puede (1976), De Este De Los Angeles (1978), and And a Time To Dance (1983). All these albums didn’t become successful.

In 1984, the band released their first LP with a major label How Will The Wolf Survive. It was a big hit in the US. The critics gave the album great reviews and the band finally received the recognition they always wanted. After a while, the LP sold over a million copies.

For the next four years, the band tried to conquer the pop audience with their eclectic music. The first attempt was the LP By the Light of the Moon (1987). The same year the band recorded several cover versions of Ritchie Valens’ songs to the movie La Bamba. The single “La Bamba” became a huge hit and the most successful song created by the band. It topped the USA, Canadian, and European charts.

In 1988, Los Lobos released a traditional Mexican music album La Pistola Y El Corazon. Then they took a 2-year break and came back with a powerful rock and roll album The Neighborhood.

In 1995, the band surprised everyone by recording an album for children Papa’s Dream with the label Music for Little People Records.

The band released 12 more albums, the latest one to date being Gates of Gold (2015). The same year they were nominated for induction into the Rock and Roll Hall Of Fame. The band continues to create new songs and performs live.