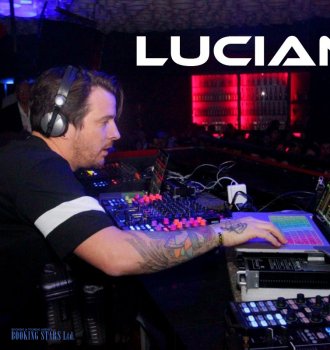 Luciano’s real name is Lucien Nicolet. He was born in a small Swiss town on 24 February 1978. His mother is from Chile, and his dad is of Swiss origin. The mix of two cultures helped shape the boy’s music preferences. After Nicolet’s parents divorced, the future dancefloor celebrity moved to Chile with his mother and sister.

In Chile, the young man became interested in punk rock. He learned how to play the guitar and performed at the school parties with his own band. At that time, the school dancefloor celebrity was closely studying the world music trends. The electronic music era has begun, and Lucien decided to study this genre.

When Lucien grew up, he had to work at a construction site to earn money for his family. In the 1990’s finding electronic music fans in Santiago was tough. Lucien spent years honing his skills, but his music didn’t seem to be in demand. In the early 2000’s, the young musician decided to move to Switzerland, where the public was more prepared to enjoy the new trends. In Switzerland, Lucien continued his studies. He wanted to become a sound engineer.

In 2002, together with Phillip Quenum, Luciano recorded two songs, which helped them create their own label Cadenza. Lucien’s sister Amelie helped them with the album cover design since she got a designer education in Chile.

In 2004, Lucien presented his debut studio LP, Blind Behaviour. At that time, he was working with Peacefrog Records. The DJ became very popular. Many fans wanted to book Luciano for their private events.

In 2009, Luciano recorded another solo album, Tribute To The Sun. It came out under his own label Cadenza. This was the last DJ’s LP to date. He started doing more work as a producer but continued releasing singles. They are still popular among his numerous fans.

In 2012, Lucien and his family moved to Barcelona. His relocated his label as well. The musician also founded a production agency Aether Artists.