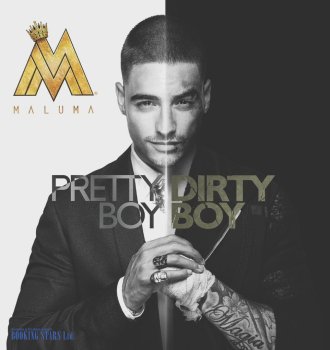 When he was young, Juan dreamed of becoming a soccer player. He played for a local team for eight years. The boy also enjoyed playing volleyball, table tennis, and chess. However, his love for music, which was with him since childhood, turned out to be stronger than other hobbies. In high school, Juan often wrote poems so his friends could give it to their girlfriends. In 10th grade, he participated in a singing contest and won it.

When Juan was 15, he wrote “No quiero”. The song was so well written that his uncle decided to give the boy a session in a recording studio as a birthday gift. The gift turned into a contract with a group of producers. That’s when Juan came up with his pseudonym Maluma.

In 2010, Maluma started taking music lessons and recording singles. He released "Farandulera", which became a local radio hit. After the song was released, Maluma was offered a contract with Sony Music. Together with Sony, he recorded the next single, “Loco.” The popularity came to the singer in a blink of an eye. Even in the beginning of his career, it was very hard to book Maluma for any private event.

In 2012, Maluma recorded his first studio album Magia. The singles "Obsesión" and "Magia" became hits. At the time this article was written, the music video "Obsesión" collected more than 184 million views on YouTube. One more single from this LP альбом “Miss Independent” reached the 2nd spot on the Columbian Singles Chart. Even though the album didn’t make it into the charts, the singles were overwhelmingly successful.

In 2013, Maluma released “La Temperatura”. The song conquered Columbian and Mexican charts and reached the 24th spot on Billboard Latin. For the first time, one of Maluma’s songs made it to the American charts. The single also earned a platinum certification in Spain.

In 2014, Maluma recorded two famous singles “La Curiosidad” and “Carnaval”. The first one reached the 48th spot on Billboard Latin chart. The second one made it to the 8th place on Columbian and 6th place on Mexican charts. In Mexico, the song was certified platinum twice.

In 2015, Maluma recorded his second LP Pretty Boy, Dirty Boy. The album quickly climbed the top spot of Billboard Latin. It reached the second place on Mexican and Spanish charts and the 8th spot in Argentina. The LP earned seven platinum and one diamond certifications.

The singles from the LP were doing even better. The song “Borró Casette” reached the second spot on the Columbia chart and the third spot on Billboard Latin. The single “El Perdedor” also conquered the Columbian chart. Maluma was nominated for several awards, including MTV European Music Awards, Latin Grammy Awards, and Billboard Music Awards.

In 2017, the artist recorded a very successful single "Felices los 4", which topped many charts and earned several platinum and one diamond certificates. In the end of the year, Maluma released “Corazon” to promote his upcoming album F.A.M.E. (2018). In just a couple of months, the song topped Argentinian and Mexican charts and received several gold certifications.