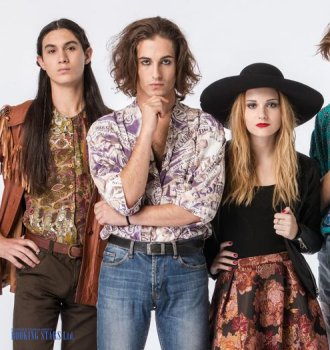 Maneskin’s founders Victoria De Angelis and Thomas Raggi knew each other since childhood. They attended the same school in Monteverdi, one of the neighborhoods in Rome, Italy.

Victoria has a Danish heritage. She was born on 28 April 2000 in Rome. The artist learned how to play the guitar when she was just 8 years old. When Victoria was in high school, she performed with local groups. Thomas was born on 18 January 2001 in Rome. He has been playing the guitar since middle school.

Thomas and Victoria got an idea to create their own rock group after graduating from high school. They were joined by a vocalist Damiano David (born in 1999), who quit high school to pursue a music career. The young artists found a drummer, Ethan Torchi (born in 2000) on the Internet by placing an ad on Facebook.

The quartet debated the group’s name for many days. Finally, they asked Victoria to say a few words in Danish. The artists chose Maneskin for its original sound and a great meaning – moonlight.

The group registered to participate in the local music contest, Pulse. For improving their chances at winning, the band members wrote original lyrics. They won the first prize.

Inspired by the achievement, the young artists went to play on the streets of Rome. They tried hard to get the labels to notice them. Maneskin visited Faenza to show their work to several Italian producers. Then they traveled to Denmark to give concerts. Slowly, the group was gaining popularity.

In 2017, Maneskin decided to try their luck on the popular talent show The X Factor Italy. They worked hard with the judge Manuel Agnelli and eventually reached the 2nd place. It was a huge success for the group, putting it on the straight road to fame.

In November 2017, the artists released their first official single “Chosen”, which came in 2nd on the Italian Singles Chart. In December, while working with Sony Music label, the group presented its first EP, Chosen. It featured the band’s original songs and several cover versions to the singles, which it performed on The X Factor. More than 50,000 copies were sold. The album went platinum. At that time, many organizers tried to book Maneskin for private events.

In January 2018, the group appeared on Italian TV as part of the show Che tempo che fa. Two weeks later, the artists were invited to a talk show E poi c'è Cattelan. In March, they performed at another TV show Ossigeno, hosted by Manuel Agnelli, who helped them reach the second place on The X Factor.

In March 2018, the group released its first single in Italian, “Morirò da re”, which came in second on the national chart. They also released a music video for the single and then recorded an acoustic version. The song sold over 150,000 copies.

The same month, they were invited to Che tempo che fa one more time. In April, a famous Italian TV host Claudio Bisio asked the artists to become the guests of his show Saturday Night Live. In June, the band performed at RadioItaliaLive concert.

In September 2018, Maneskin presented the lead single “Torna a casa” from the upcoming album. The song topped the national chart and stayed there for three months. The single sold more than 150,000 copies. The group also recorded a music video and an acoustic version of the song.

In October 2018, the musicians presented their debut LP, Il ballo della vita. It topped the Italian chart, earned two platinum certifications, and sold over 100,000 copies. To support the LP, in November, Maneskin embarked on a tour of Italy. In 2019, the artists are planning to visit Spain, France, Switzerland, Germany, and the UK.

To promote the LP, the label helped the group film a documentary, This Is Måneskin, which came out in October 2018. The film talks about the band’s road to fame from The X Factor to the first LP.

How much does it cost to book Maneskin:
Price inquiry
Maneskin booking agent:
Contact agent
Maneskin Contacts:
Send Maneskin a message
« previous next »