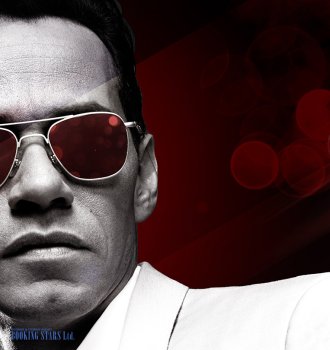 Marc Anthony– singer, songwriter, actor, and producer from the USA

Marc Anthony (full name Marc Anthony Muniz) was born on 16 September 1968 in New York. His parents came to the USA from Puerto Rico. Marc was growing up in the so-called “Spanish Harlem”. His father was a musician, who was hoping that the son would follow in his footsteps. That’s why he called the boy in honor of one of the most famous Mexican artists. Later, Marc had to shorten his name in order to avoid confusion regarding the name similarity.

When he was young, Anthony listened to rock and R&B. He started writing lyrics when he was still in high school. Thanks to his father’s help and a great desire to perform, Anthony worked with such bands as Menudo and Latin Rascals. However, he dreamed of a solo career and started performing in New York bars and nightclubs. That’s where he met a producer Little Louie Vega, with whom he worked on many songs.

In 1991, Anthony released his 1st LP, When The Night Is Over. The album didn’t make it into the charts and wasn’t commercially successful.

In 1992, Vega and Anthony got a chance to boost their popularity. They performed as an opening act for the Latin music star Tito Puente. Back than salsa was becoming very popular. However, Marc wasn’t a big fan of it. Nevertheless, Anthony embraced the style and signed a contract with RMM Records.

In 1993, Anthony recorded his first Spanish LP, Otra Nota. It was very popular in New York and earned high scores from the critics. However, the album didn’t make it into the charts. Back then, it was easy to book Marc Anthony for private events. However, after the album was released, his schedule became very busy. The artist started touring the world.

In 1995 and 1997, Marc released two albums Todo A Su Tiempo and Contra La Corriente. The second one made it into Billboard 200 and settled on the 74th spot. After Anthony became popular, both of these albums earned a gold status from RIAA.

The popularity came to the musician in 1999 after he released an English-language LP, Marc Anthony. The album earned a platinum status half a year after the release. It reached high spots on the charts of many countries and turned Anthony into a big celebrity.

In 2001, the artist recorded, Libre, which was much less successful than his previous album but still made it into the charts.

In 2003, Anthony released another LP, Mended, which reached the 3rd spot on Billboard 200 and topped Canadian Albums Chart. The record earned gold and platinum certifications in many countries.

Anthony’s acting career is also worth noting. Between 1998 and 2007, he worked on half a dozen of Hollywood movies. However, all he got was supporting roles. Even though music is Anthony’s biggest passion, he is not giving up on films. The acting career is taking up too much of his time. That’s why music albums come out once every three to four years.

In 2013, Anthony recorded his last LP to date, 3.0. The album was very successful. It earned four platinum certifications from RIAA. One of the singles, “Vivir Mi Vida”, topped Hot Latin Tracks and went platinum 16 times. After the album came out, Marc went on a Vivir Mi Vida World Tour, during which he performed in 15 countries.