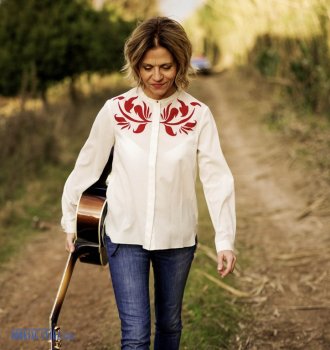 Marcela Morelo was born on 13 December 1964 in Lanus, Argentine. Marcela loved music since she was a young girl. Her grandfather Santiago was a musician and an accordion player. Together with her granddad, Marcela performed at weddings and birthdays.

When she turned seven, Marcela went to a music school where she studied for 7 years. In many interviews, she said that wanted to become a singer for as long as she could remember. When she was a teenager, Marcela sang with some local groups, such as Pomelo Galante and Clips.

Marcela decided not to go to a university like most of her friends. She knew she belonged in the music industry and started working in advertising agencies. Morelo even managed to score some gigs on radio and TV.

While singing with one of the local bands, Marcela got a chance to work with such famous Argentinian musicians as David Lebon and Guillermo Guido. She traveled all over the country and gave concerts in bars and clubs. Marcela’s acts were very popular thanks to the energy and heart she put into her performance.

In 1996, her friend Rudolfo Lugo suggested that she could record a demo. Marcela created her first album with three songs. The young woman wrote the lyrics and recorded the demo in one of her friend’s studios. Morelo was so sure of her success that she immediately took the disc to BMG, who offered her a contract.

In 1998, Morelo released her first studio album Manantial. She included the demo songs into the album and wrote 12 more. The LP was a hit. It immediately made Morelo an international star.

She went on a tour to Puerto Rico, Mexico, Columbia, Chile, Peru, Spain and many other countries. In a short while, the album went platinum selling over 80,000 copies. The single “Corazón Salvaje” was a big hit.

In 2000, Morelo released another album Eclipse, which became platinum in Spain almost immediately. It also earned a golden record in Argentine. The single “Luna Bonita” stayed on top of the charts for 4 weeks.

In 2001, Morelo released Tu boca. The most famous song from the LP was “Una Y Otra Vez”. The album earned a golden certification.

In 2007, Marcela recordad Fuera Del Tiempo. After the release of the album, Morelo went on a Latin American tour to support the LP. The tickets to her concerts were selling like hot cakes. She was so popular that bars and nightclubs were no longer even trying to book Marcela Morela for their events.

Marcela recorded three more studio albums, the latest one to date being Espinas y pétalos (2016). Each one of her nine albums was certified either golden or platinum. Morelo earned five Gardel Awards, which is an honorable music award in Argentine. Morelo continues to work on her music and performs live.