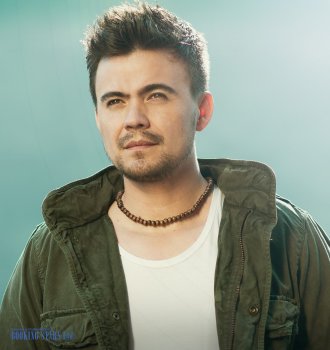 Mario Andrés Guerrero Vilches was born in Graneros, Chili on 19 September 1981. His parents Maria Vilches and Servando Guerrero didn’t have anything to do with the music business, however, Mario’s talent became obvious when he was still a child. Guerrero started writing his own music when he was just 10 years old. Mario finished high school in Graneros and enrolled in the university in Santiago, where he majored in psychology.

The recognition came to Mario when he was chosen to participate in the TV talent show Rojo Fama Contrafama. Guerrero won the second season. He easily conquered the audience and jurors’ hearts by his warm voice. One of the moments everyone remembered was his final performance on the show. He sang “Gethsemane” from the rock opera Jesus Christ Superstar.

In 2003, Mario released his first LP Mario Guerrero. It immediately became very popular. The single “Me gustas” reached the third spot on the Chilean charts. Two other singles from the album "Dime que sí, dime que no" and “Si No Estas” reached high spots as well. “Me gustas” was popular on the radio.

In 2005, Mario recorded another LP Te llevo en el alma. The most popular single from the album was “Celos”. It reached the second spot on the Chili Singles Chart. As of today, it’s the highest charted song recorded by Mario.

In 2007, Guerrero was invited to become a judge of a contest on Vina Del Mar festival. The same year he recorded a song “Amanecí otra vez” which became a soundtrack for the popular TVN telenovela Corazón de María.

In 2008, Mario released his third album Huellas de un ayer. Some of the songs were written in ranchera genre. The song "La malagueña" reached the 78th spot on the charts.

In 2010, Guerrero released another LP Te amaré. While recording the album, Mario worked as a singer, songwriter, and composer. The lead single of the album "Todo vuelve a ti", which came out in 2009, conquered the audience, and reached the 7th spot on the charts. The singer was becoming more and more popular. It was rather tough to book Mario Guerrero for an event.

In 2012, Mario released his fifth studio album Del amor. Three singles from the album made it into the top-20 list of the charts.

In 2012, the artist signed a contract with Warner Chappell Music to work as a composer.

In 2016, Mario released the lead single from the next album “Fueron tus besos”. It secured the 10th spot on Chili Singles Chart. In the end of the year, Mario went on a tour and visited several Chilean cities. All concerts were sold out. Mario’s music videos are collecting millions of views. He has thousands of followers on social media.