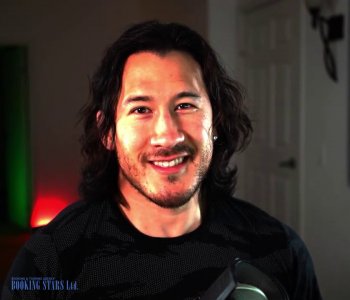 Mark Edward Fischbach, known as Markiplier on social media, is an American gamer, actor, and comedian best known for his playthrough videos on YouTube. Mark has become a prominent gaming star on YouTube and his channel has more than 14 billion lifetime views. Mark’s channel focuses on play-through and commentary gaming videos specifically featuring survival horror video games. In addition, Mark hosts a number of charity livestreams and has raised more than $3 million for charity.

He co-founded the clothing company Cloak with fellow YouTube star Jacksepticeye. Mark Edward Fischbach was born on June 28, 1989 at the Tripler Army Medical Center in Honolulu, Hawaii to father Cliffton, who was a German-American stationed in Hawaii at the time. His mother is a native Korean. Mark has one older brother, Jason (known as Tom), the author of the webcomic Twokinds. Once Mark was born, the family moved to Cincinnati, Ohio, where Mark was raised. Mark studied biomedical engineering at the University of Cincinnati, but Mark later dropped out to pursue his YouTube career.

Mark started his YouTube channel “Markiplier” in 2012 as a young child, and by the time he was studying at the University of Cincinnati, he dropped out to pursue his YouTube career. At first, Mark intended to post sketch comedy and other types of comedic videos to his channel. However, he soon switched to adding gaming videos to his mix on YouTube.

Mark is known for his gaming playthrough videos of indie and horror video games like “Amnesia: The Dark Descent,” Slender: The Eight Pages,” and “Surgeon Simulator.”

In addition to his gaming videos, which are a major part of his channel, Mark posts a number of sketch comedy videos. He collaborates with other popular YouTube stars like Crankgameplays, Jacksepticeye, LordMinion777, Muyskerm, PewDiePie, Matthias, Game Grumps, and more. One of those YouTube stars, LixianTV, has worked as Mark’s editor.

Mark also hosts a number of charity live streams on his channel to raise money for causes that are important to him. He will play games on these live streams while he collects donations for various charities and organizations. In the past, these organizations have included Cincinnati Children’s Hospital Medical Center, the Depression and Bipolar Support Alliance, and Best Friends Animal Society. By 2018, he and his viewers had raised more than $3 million for various charities, according to Mark.

Mark took a short hiatus from YouTube in 2018 when his step-niece, Miranda, was killed in a car accident at the tragic age of 19. He released a video explaining he would not be able to make videos for a while, and also had Miranda’s father Mark on his channel as well.

Mark has branched out from YouTube as well. He has appeared in “Smosh: The Movie,” TomSka’s “asdfmovie” series, “Five Nights at Freddy’s: The Musical” and he has been a part of Disney XD’s “Gamer’s Guide to Pretty Much Everything.” Mark has also appeared on YouTube’s 2015 Rewind and 2016 Rewind.

In 2019, Mark announced his new venture, a YouTube Originals production titled “A Heist With Markiplier.” It’s a choose-your-own-adventure story. The series has more than 30 different possible endings,and features other popular gaming YouTubers like Game Grumps and Rosanna Pansino.

You can purchase his official merchandise through his website.

How much does it cost to book Markiplier :
Price inquiry
Markiplier booking agent:
Contact agent
Markiplier Contacts:
Send Markiplier a message
« previous next »