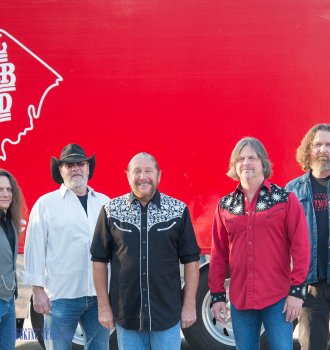 The Marshall Tucker Band is a rock and country band, which was formed in 1972, in California. The current lineup includes Doug Gray, Marcus James Henderson, Chris Hicks, Rick Willis, Tony Black and B.B. Boden. The band is mostly famous for such songs as “Heard It In a Love Song”, “Can’t You See”, and “Last of the Singing Cowboys”.

Surprisingly enough, there were no Marshalls or Tuckers in the band when it was formed in the early 1970’s in South California. The band got its name from a piano tuner whose name was on a keychain that the musicians found in some recording studio. Some of the band founders used to work with the band “Toy Factory” in 1960’s. The style they’ve chosen contained elements of rock, country, gospel, and jazz.

In 1973, the band performed as an opening act at the Allman Brothers Band concerts. But soon they became famous enough to give their own concerts.

The LPs A New Life (1974), Seachin’ For a Rainbow (1975) and Long Hard Ride (1976) were single discs. Where We All Belong (1974) was a double, one part of which was recorded live and allowed The Marshall Tucker Band to show the fans their real jam band sound.

In 1977, the band was at the peak of its career when it released California Dreams. It became the most successful LP recorded by the band. It earned a platinum certification. The LP contained a hit single “Heard it in A Love Song”.

In 1979, the band signed a deal with Warner Bros. and recorded 5 more fairly successful albums. Their last LP to get into the charts was Greetings from South Carolina (1983). The band released 10 more albums but they weren’t as successful as their previous work. The group went through several label and lineup changes. They continue to work on new songs and perform live.