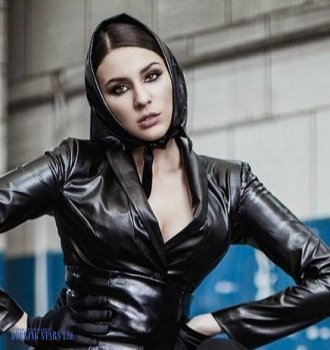 Maruv’s real name is Anna Korsun. This Ukrainian pop singer became famous as part of the band, The Pringlez, which came in third in the national music competition, New Wave 2015. In 2018, Anna decided to pursue a solo career and adopted an unusual pseudonym, Maruv.

Korsun was born on 15 February 1992 in Pavlohrad, Ukraine. She spent her childhood there. Anna attended a regular school. She also enrolled in a music school to hone her vocal talents. When she was a teenager, the aspiring artist enjoyed dancing. She was part of the dance group, Lyk, which performed in several Ukrainian cities.

After school, Korsun moved to Kharkov. She was accepted into two universities. Even though it seemed to be a tough choice, the singer chose the one, which had a better after school amateur performance program. Kharkov Polytechnic Institute supported the students’ desire to develop their acting, singing, and dancing skills. Anna studied physics and electronics but spent her free time on the hobby, which was music.

In 2012, Anna decided to form a band called The Pringlez. The artists performed cover versions of many different hits in the pop-rock genre. Next year, the band won a local contest, Pepsi Stars of Now, and came in third on New Wave.

In 2016, the band members enrolled in the contest to get a chance to perform in Eurovision. They wanted to sing a hit, “East to Love’. Even though the artists made it to the semifinals, they didn’t win. After that, Anna participated in many TV shows that had to do with singing.

In 2017, Korsun moved to Kiev. However, the band stayed in Kharkov. The young singer decided to change her music direction and image. She started pursuing a solo career and adopted a pseudonym, Maruv.

In May 2017, the singer recorded her first EP, Stories, which featured songs in English, Ukrainian, and Russian. She had to borrow money to record the album because none of the labels wanted to sign a contract with the aspiring artist.

The turning point of Anna’s career was her meeting DJ Mikhail Busin, who used to work with famous Ukrainian artists, Nastya Kamenskih and Potap. Korsun still thanks the artist for discovering her talent and giving the singer a chance. Together with Busin, Anna released a single “Spуnу”, which became a hit. At that time, many fans started trying to book Maruv for private events.

The same year, Anna and Busin recorded a hit single “Drunk Groove”. The single topped numerous charts. In the spring of 2018, the artists presented a music video for the song. It collected more than 100 million views on YouTube.

Maruv gained popularity quickly. Anna started giving concerts in Ukraine and abroad. She signed a contract with Warner Music Russia. With the assistance of the label, the singer recorded several singles and albums, all of which became popular in Ukraine, Russia, and beyond.

In May 2018, Maruv released a remix album. In July, she presented a music video for the single “Focus on Me”. In it, she shocked the fans with provocative appearance. The LP, Black Water, came out in September. It featured 13 tracks, which helped the album earn four YUNA awards.

Maruv works closely with DJ Busin, who plays the guitar. Other members of her team are a guitar player Zhenya Chernobrovkin and a drummer, Kostya Kim. All the studio work is done with the assistance of a sound engineer Roman Nepomnyaschiy.

Anna has grandiose plans for the future. She is planning to be nominated for a Grammy Award and record a single with her idol, Kanya West. The young woman is in love with France. She is studying French and planning to record a song in this language.

In 2019, Korsun won the local music contest and got a chance to represent Ukraine on Eurovision. However, she refused the opportunity. The young woman continues working on her current project and plans to release a new LP in the nearest future.