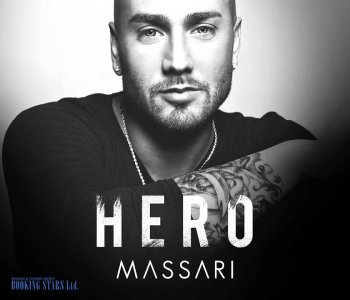 A vocalist whose music is a potent mixture of East (traditional Middle Eastern accents) and West (R&B and hip-hop song structures), Massari is a Lebanese-born singer who developed an international following after he and his family relocated to Canada. After his self-titled 2005 debut peaked in the Canadian Top 30 and was certified gold, he issued follow-up Forever Massari in 2009, then continued issuing singles until his third effort, Tune In, arrived in 2018. He has scored several number one hits in his native Lebanon, including 2020's "I See the Dream (Badna Salam)."
Massari was born Sari Abboud in Beirut on December 10, 1980. As he was growing up, Lebanon became mired in Civil War, and when he was ten, his family emigrated to Montreal, Quebec, Canada. When he was 13, the family moved to Ottawa, Ontario, where Sari performed for an audience for the first time at a talent show. In 2001, he decided to become a professional entertainer, adopting the stage name Massari, which means "money" in Lebanese. In 2002, he released his first single, "Spitfire," which gained radio airplay in Ottawa and the surrounding area. In 2005, he released his first full-length album, a self-titled effort distributed by the Canadian label Capital Prophet. Featuring guest appearances from rappers Belly and Loon, the album was a commercial success, going gold in Canada and charting in Europe, Asia, and the Middle East. The relationship between Massari and his record label became contentious, and in 2007, he and Capital Prophet announced they had severed their relationship. Massari signed with Universal and released his second full-length album, Forever Massari, in 2009. However, his relationship with Universal proved to be short-lived, and in 2011, he signed a new deal with Capital Prophet and released the single "Dance for Your Life." Two more hit singles followed, 2012's "Brand New Day" and 2013's "Shisha" (the latter featuring French Montana), both of which went gold in Canada. "What About the Love" (with Mia Martina) came out in 2014, and several of his previously issued singles appeared on 2015's Hero EP. During the next few years, Massari devoted himself to live work, both in Canada and around the world, as he made plans for his next album. In March 2017, he issued two singles, "So Long" and "Done Da Da," ahead of his third album, tentatively titled Beirut. Over the course of the year, he changed the title to Tune In. Released in July 2018, the album featured guests Tory Lanez, Beenie Man, Afrojack, Mohammed Assaf, and Shaggy. "Roll with It," featuring Assaf, topped the charts in Lebanon, as did subsequent single "Ya Nour El Fin" (with Maya Diab and French Montana). "Albeh Nkasar," a response to Lebanese political protests, was released in 2019. Massari collaborated with Ali Gatie on the song "I See the Dream (Badna Salam)," which appeared in late 2020 and once again topped the Lebanese pop charts.
Book Massari

How much does it cost to book Massari:
Price inquiry
Massari booking agent:
Contact agent
Massari Contacts:
Send Massari a message
« previous next »