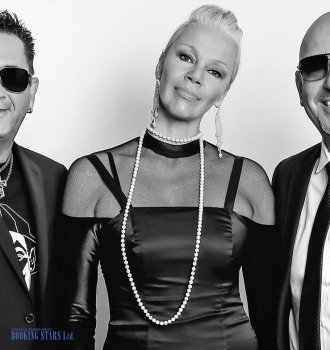 The band’s story began in 1989 when the musician Enrico Zabler met DJ Tommy Schleh. They decided to form a joint dance project and called it Masterboy. In 1990, the musicians released their first single "Dance To The Beat", which suddenly became a huge hit.

By the time summer came, the song entered German charts. On the national chart, the track climbed to the 26th spot and stayed there for 16 weeks. For a debut single, it was an overwhelming success. Many fans dreamed of booking Masterboy for their private events.

Soon Zabler and Schleh were joined by Mendy Lee and David Atterberry. The band started going on different tours and acquiring more and more fans. In December, they released the second single, "Shake Up And Dance", which also became a hit. The track reached the 32nd place on German music charts.

In 1991, the band released their first album, The Masterboy Family. At about the same time, the famous British band Pet Shop Boys offered to work with Masterboy and re-release their hit song "Shake Up And Dance" on the UK label. The group agreed.

In 1993, Masterboy started working on their second studio LP. They released the first single under the name of "Fall in Trance". Soon after, they presented "Everybody Needs Somebody", which reached high spots on German, Austrian, Finnish, and the UK charts. The single was recorded together with the new vocalist of the band Trixi Delgado. The 2nd LP, Feeling Alright, came out the same year.

In 1994, Masterboy released a new single "I Got To Give It Up". The music video for the song appeared on MTV and conquered the heart of music lovers in Switzerland and France. The next track, "Feel the Heat of the Night", also became a hit. It reached the 2nd spot on the French charts. The 3rd single "Is This the Love" became popular in more than 10 European countries. The same year, the band released their 3rd studio LP, Different Dreams, which climbed the 19th spot of the German music chart.

The band spent the end of 1994 and 1995 touring the world. They even visited South America. However, the musicians made sure their studio work didn’t suffer. They released two hits "Generation of Love" and "Anybody (Movin' On), which became even more successful than the group’s previous work. The songs were featured in Masterboy’s fourth studio LP, Generation of Love, which came out in 1996. The same year, the musicians recorded a new song, "Land of Dreaming", which conquered European charts and reached the 12th spot on Billboard Dance Chart in the USA.

In the summer of 1996, Trixi left the band. The team members replaced her with Linda Rocco. With Linda, they recorded two singles from the upcoming albums. Both "Mister Feeling" and "Show Me Colours" became hits.

In 1996, the band released their fifth LP, Colours, which fared well on the European charts. The songs "Just for You" and "La Ola Hand in Hand", which came out in 1997, were popular but couldn’t beat the records set by the band’s previous work. The group’s popularity seemed to be waning.

In 1998, Masterboy went on a hiatus. In 1999, they came back and recorded two singles "Porque te vas" and "I Like to Like It", which were successful.

In 2003, the band decided to go on another hiatus and disappeared for 10 years.

In 2013, at one of the retro parties, the band got together and performed several old hits.