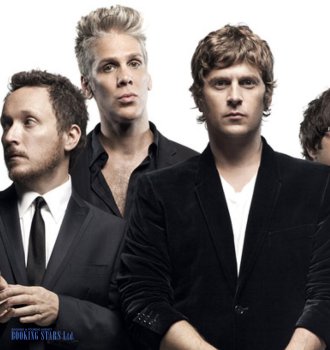 The rock band Matchbox Twenty was formed in 1995 in Florida. The current lineup includes Rob Thomas, Kyle Cook, Brian Yale, and Paul Doucette. They hold several awards, including two American Music and People’s Choice awards. The band is mostly famous for such hits as “Push”, “Bent”, “How Far We’ve Come”.

Matchbox Twenty used to be called Matchbox 20, which is what’s written on the matchbox with twenty matches. The band managed to sell more than 40 million album copies worldwide. Rob Thomas, who was born in Germany, is the author of most of the lyrics and the leading vocalist of the band. Before creating Matchbox 20, Tomas, Yale, and Doucette were part of the band called Tabitha’s Secret.

In 1996, Matchbox Twenty released their first album Yourself or Someone Like You. Even though the first single “Long Day” wasn’t successful, in the next two years several songs from that album, including “Push”, “3 am”, and “Real World” became very popular and got high spots on the charts. Eventually, the LP sold over 12 million copies in the USA and received a diamond status.

For several years the band was giving concerts and going on tours in support of that first album. At that time, they recorded a live version of their top-40 hit “3 a.m.” for a charity album Live Lounge X. The proceeds from that LP went to cerebral palsy research.

In 2000, the band released their second album Mad Season. This is the year the band changed its name from Matchbox 20 to Matchbox Twenty. The LP contained several hits, including «Bent”, which topped Billboard Hot 100. The nostalgic ballad “If You’re Gone” became very popular among the band’s fans in their 30’s. The next two singles “Mad Season” and “Last Beautiful Girl” weren’t very successful.

In 2002, the band released their third album More Than You Think You Are, which was more of a rock album. The single “Unwell” became a big hit in the USA and Austria.

The band released one more album and went on hiatus. Between 2004 and 2007 they weren’t working together. At that time Rob Thomas recorded a solo album Something To Be, which topped Billboard 200.

The band reunited in 2007 and went on another hiatus in 2008, which ended in 2010. Matchbox Twenty continues to work on new songs and performs live.