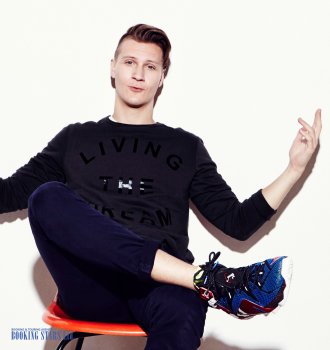 Matoma – DJ and producer from Norway

Matoma’s real name is Tom Stræte Lagergren. He was born 29 May 1991 in Asnes, Norway. Tom enjoyed music since childhood. He took private piano lessons and learned fast. The boy won a local music contest when still in middle school. The musician was inspired by the work of such pianists as Håvard Gimse and Leif Ove Andsnes.

In his teenage years, Tom suddenly lost interest in classical piano. He became involved with electronic music. Using his home computer, Tom mixed piano music with electronic components. Soon he realized that such music was what he dreamed about. Lagergren enrolled in Norwegian University of Science and Technology and earned a bachelor degree in Music Technology.

While studying at the university, the artist was perfecting his style, which consisted of piano, guitar, and flute in electronic format. For his work, Tom used Cubase 8 Pro software.

Tom debuted in the music industry on his 23rd birthday. He presented a remix "Free Fallin Tropical Mojito". Nelsaan, who before Tom, mostly worked with Latin singers, produced the song.

After an official request from Universal German, Tom began working on a remix of a song by the British musician Marlon Roudette “When The Beat Drops”. The remix was officially released in July 2014 and became popular.

Matoma finally made it into Norwegian charts when he released a remix to the single “OId Thing Back”. Initially, the song was written solely for The Notorious B.I.G. Later it became their joint project. The song was popular in New Zealand, Finland, Denmark, and Sweden. It earned a platinum certification in Norway.

After such a success, Matoma became a target for many different labels. He chose to sign a contract with Big Beat Records. At that time, many fans tried to book Matoma for private events, but he was often busy with other projects.

In 2014, the musician received many offers for remixes of older hits. He accepted one from Enrique Iglesias and created a remix for “Bailando”. Then Matoma worked with Hedegaard on his song “Happy Home”. For that project, Tom signed a contract with Copenhagen Records. Later, he worked on Eminem’s “Business” and Marit Larsen’s “I Don't Want to Talk About It". The song was produced by Tom’s friend Nelsaan.

In 2015, the artist presented a remix to MYNGA’s and Cosmo Klein’s “Back Home”. That year, the musician recorded 33 songs. All of them were uploaded to SoundCloud. The same year, he released the debut LP, Hakuna Matoma. The album featured the work of such artists as Stewart, Popcaan, Jennifer Lopez, Wale, The Notorious B.I.G., One Direction, Dua Lipa, Nico & Vinz, Ralph Tresvant, Becky Hill, Christopher, Sean Paul, Coldplay, Astrid S, Akon, Madcon, Frenship, Dboy, Jason Derulo, and Ja Rule. "False Alarm", "Take Me Back", "Adventure of a Lifetime", "Paradise", and "Stick Around" became hits.

In October 2016, a British band The Vamps offered Matoma to work on the song “All Night”. The song turned out very popular. It climbed to the 13th spot on the Norwegian chart and settled on the 24th position on UK Singles Chart. The single became platinum in the UK.

In 2017, the DJ was nominated for Spellemannprisen '16 (Norwegian Grammy) for Årets Nykommer & Gramostipend (Newcomer of the Year & Gramo scholarship) and Årets Låt (Song of the Year).

In August 2018, the musician released his 2nd LP One in a Million. It climbed to the 12th spot on the Norwegian Albums Chart.