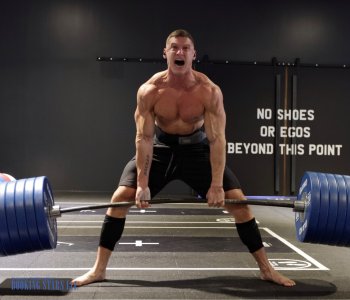 MattDoesFitness born on January 19, 1986 in England is best known as a YouTube Star. Fitness aficionado known for documenting his love of Powerlifting, Bodybuilding, food challenges, and more on his self-titled YouTube channel. After creating his YouTube channel in March 2013, he followed in May with the debut video “Block start.”
Family
His real name is Matt Morsia. He is married to Sarah and they have a son Luca who was born in September 2016
Before Fame
Growing up, Matt had an eye for Sport and this caused his active engagement in sport starting out by playing football for his county before switching to athletics at 18 where he represented England in the triple jump.
A prolapsed disc in my spine forced him to retire from Athletics and it was at this point that for rehabilitation reasons he started hitting the gym.At this point such commitment got him engrossed with the feeling of being in the gym, rebuilding his body, and he quickly got addicted to the process of building muscle and getting stronger.
Over time He began competing in powerlifting, eventually winning a silver medal at the European Powerlifting Championships in 2016
Career
He started out in his Career as a PE Teacher at The Folkestone Academy after he graduated from University of Kent but this he had to drop later on and abandon in order to focus more on his YouTube channel.
With more than a million subscribers,Matt Morsia is the UK's number one fitness YouTuber.
The United Kingdom fitness enthusiast runs a YouTube channel MattDoesFitness. His content is mainly composed of videos on power-lifting, bodybuilding, food challenges, fitness, training, vlogs and anything else he finds interesting for his viewers. He often features his wife and son Luca. Over the past seven years, Matt has published an incredible 1,400 videos mostly filmed in Kent.
He records clips wherever and whenever he can, which can sometimes perplex those unfamiliar with the art of vlogging.
“Old people are so suspicious,” he says. “I have been thrown out of Waitrose three times because I was filming.”
As well as regularly updating his 800,000+ Instagram followers. At a certain point there such was the demand for more videos, that Sarah quit her teaching job at Hythe Bay Primary School to help her husband with the channel full-time. He uploads around 3 videos a week on a regular basis.
Fellow fitness YouTuber Brian Turner r appeared in his September 2015 video “EPIC BODYBUILDER ACNE TRANSFORMATION!!”
Trivia
One of his most popular videos is the February 2017 video titled "20,000 CALORIE CHALLENGE | Epic Cheat Day | Man vs Food."
Social Media
His YouTube channel has over 1.5 million subscribers as of 2020 and has accumulated over 340 million views so far. It is able to get an average 600,000 views per day from different sources. This should generate an estimated revenue of $3,000 per day ($1.1 million a year) from the ads that appear as the videos play.
And on Instagram he has a massive 814,000 followers as at June 7th 2020.(https://www.instagram.com/mattdoesfitness/)
Such views and internet activities have accumulated for him an estimated net worth of $700,000