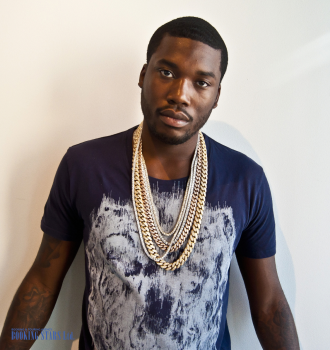 Meek Mill (real name Robert Rihmeek Williams) was born on 6 May 1987 in Philadelphia. His father was killed in 1992 during a robbery attempt. Robert discovered hip-hop culture thanks to his uncle DJ Grandmaster Nell.

When Williams was a teenager, he and his friends founded a band called Bloodhoundz. They recorded four mixtapes.

In 2005, Robert was arrested for illegal firearm possession and attacking police officers. He had received a suspended sentence.

In August 2008, Williams adopted a pseudonym Meek Mill and released his first mixtape Flamers, which was available for free downloading. The album caught the attention of Charlie Mack from 215 Aphillyated Records. He offered the rapper a deal with his label and the aspiring musician agreed. At about the same time, Williams got another deal offer from rapper T.I. and his label Grand Hustle Records. However, the popularity and success in the music industry couldn’t keep Meek Mill from breaking the law. Shortly, he was arrested for drug dealing and firearm possession. Williams spent seven months in jail.

In February 2009, the rapper released his next mixtape Flamers 2: Hottest In Tha City. Another album Flamers 2.5: The Preview came out in October. Soon Mill started working with DJ Drama from Grand Hustle Records. Together they recorded a new mixtape Flamers 3: The Wait Is Over (2010). Five months later, Mill presented another disc, Mr. Philadelphia. After the release, Meek left the label due to disagreements with T.I.

In 2011, Williams signed a deal with Maybach Music Group. In spring, he made it into XXL’s magazine "Freshman Class of 2011" The same year, the rapper released his first official single "Tupac Back”. The next one “Ima Boss” received a gold certificate. The remix to this song reached the 51st spot on Billboard Hot 100.  In the summer, Mill released a new mixtape Dreamchasers, which received good reviews from the critics.

In May 2012, Mill uploaded Dreamchasers 2 to DatPiff.com. A short time later, the disc became platinum. At the end of 2012, Complex media platform put the mixtape on the 14th spot of its best albums list. MTV put it on the 19th place of a similar rating. In October, Williams released his first studio LP Dreams & Nightmares. It debuted on the 2nd spot of Billboard 200.

Dreamchasers 3 came out in September 2013. In December, XXL magazine put it on the 20th place of its best mixtape 2013 rating.

Between July and December 2014, Williams was jailed for violating probation. Due to that, the second LP’s release was delayed. Dreams Worth More Than Money came out in 2015 and immediately topped Billboard 200. The album earned a platinum status and a Billboard Music Award as “Top Rap Album.”

At the beginning of 2016, Mill released two EPs, 4/4 и 4/4 Part 2. A few days later, he violated probation again and was sentenced to three months of house arrest. This kept Meek Mill from attending private events. Dreamchasers 4 were presented in the fall and reached the third spot of Billboard 200.

In November 2017, Williams went to jail for numerous probation violations. He is expected to be released in two to four years.