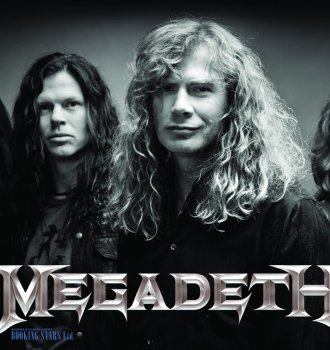 The thrash metal band Megadeth was formed in 1983, in Los Angeles. The current lineup includes Dave Mustaine, David Ellefson, Kiko Loureiro, and Dick Verbeuren. They hold numerous awards, including a Grammy. The band is mostly famous for such songs as “Foreclosure of a Dream” and “Symphony of Destruction”.

This band was formed in 1993 when Dave Mustaine left Metallica (he was fired for abusing alcohol and drugs). Since then they released 15 studio albums, 47 singles, 10 video albums, and 5 live albums. Megadeth is one of the most commercially successful thrash metal groups in history. They sold over 22 million album copies. In the USA, Megadeth received 4 platinum album certifications, 6 golden certifications, and seven Grammy nominations, one of which turned into an award.

The band fell apart in 2002 due to Mustaine’s health problems. However, he recovered and reunited the band in 2004. The same year, they released a successful album The System Has Failed, which showed that the band was still on top of its game. For the past 32 years of its activity, the band went through over a dozen lineup changes. Only Dave Mustaine still stays with the group as the leading vocalist and songwriter.

The release of the band’s second studio album Peace Sells…But Who’s Buying (1986) is considered to be an important point of the thrash metal history. All Music Guide called it one of the most important metal albums of the decade and one of the best albums of all times. In May 2006, VH1 put the song “Peace Sells” on the 11th Spot of the top-40 metal songs. The song was included into the video games Grand Theft Auto: Vice City and True Crimes: Streets of LA.

In 2004, Guitar World Magazine put Dave Mustaine and Marty Friedman the 19th spot on the list of 100 greatest heavy metal guitarists of all time. The band Megadeth affected the development of extreme metal in the end of 1980’s and beginning of 1990’s. Many popular metal groups, including Pantera, Arch Enemy, Lamb of God, and In Flames call Megadeth their inspiration.

After recovering from the injury, Mustaine turned to religion and announced that he wouldn’t play some of his previous songs. However, the band continues to go on tours and performs live.