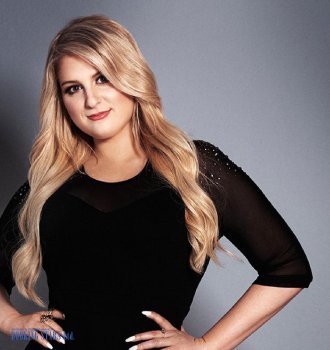 Meghan Trainor was born on December 22, 1993, in Massachusetts. She is a singer, songwriter, and a producer. Meghan is mostly famous for such hits as “All About That Bass”, “No”, and “Lips Are Movin”.

Meghan started singing when she was just 6 and writing songs since 11. In 2004, she performed for the first time at her aunt’s wedding, where she sang “Heart and Soul”.

In 2005, Meghan started singing professionally. She was part of the band Island Fusion, which consisted of her family members. The first Trainor’s song was called “Give Me a Chance”. While studying in high school, Meghan joined a jazz band and rehearsed at her home studio. At 15, Meghan enrolled at Berklee College of Music.

When Meghan turned 18, she started writing songs professionally. A little later, she independently released two albums I’ll Sing With You and Only 17. She wrote songs for Shay Mooney from the duo Dan + Shay and for Hunter Hayes from R5.

In 2014, Trainor signed a contract with Epic Records and released her first single “All About That Bass”. The song was a big hit, which topped Billboard Hot 100, ARIA charts, UK Singles Charts, and many more. The single was included in her debut album Title (2015), which was also a big success. The album topped Billboard 200 and UK Albums Chart.

In 2016, Meghan released her second studio album Thank You. It reached the 3rd spot on Billboard 200 and 5th spot on UK Albums Chart. The LP sold 320,000 copies in the USA so far. The single “No” featured in the LP became a big hit, reaching the third spot on Billboard Hot 100 and receiving several platinum certifications.

Meghan is famous for her versatility. She works with various genres, including country, hip-hop, reggae, and soca (Caribbean music). Trainor claims that she can write a song in 45 minutes. Meghan became an inspiration for young men and women, who are not satisfied with their bodies. She was commended for her work by such celebrities as Beyoncé, Jennifer Hudson, Miranda, Lambert, and Brad Paisley. Meghan continues to work on her music and performs live.