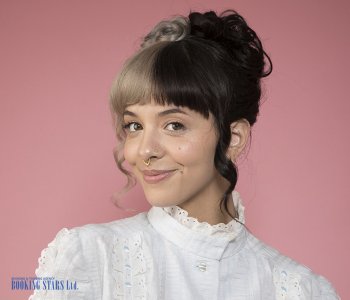 Melanie Martinez - Young American singer Melanie Martinez first appeared in public on the third season of the national television show "The Voice", and soon her songs "Too Close" and "Seven Nation Army" made it to the Top 200 Single Chart on iTunes. After the project, the girl seriously took up creativity, began to compose songs and released the album "Cry Baby", which received gold and platinum certificates.

The singer, whose full name sounds like Melanie Adele Martinez, was born on April 28, 1995, into a family with Dominican and Puerto Rican roots living in the Astoria area, in the northwest of New York's borough of Queens.

However, when the girl was 4 years old, the parents of Jose and Mursi moved to the English-speaking area of ​​Long Island, where music by Britney Spears, Shakira, Tupac Shakur and The Beatles sounded in all the bars.

Melanie liked the fiery melodies of hip-hop and disco, as a child she took singing lessons, and even earlier, an interest in poetry arose, and the first poems were born. At this stage, due to excessive isolation and a change in emotional states, the girl did not demonstrate her own talents in public and only by the age of 14 had mastered the guitar and presented her relatives with a small repertoire.

In junior high school, Baldwin Martinez made her first public appearance. Her debut took place on the Varsity Talent Show, broadcast on the MSG satellite channel. And in 2012, the girl went to audition for the 3rd season of the musical project "The Voice" and unexpectedly received an invitation to the main tour.

In preparation for the show, fragile Melanie with a height of 157 cm and a weight of 46 kg got a tattoo and, dividing her hair into 2 halves, dyed it in the manner of the heroine of the cartoon "101 Dalmatians" - the main villainess Cruella De Ville.

At the start of her professional biography, Melanie appeared among the main participants in the third season of the musical project "The Voice" and sang the song "Toxic" by Britney Spears. After that, she continued to participate under the leadership of Adam Levine from Maroon 5.

Then the girl rehearsed the compositions of the popular duo La Roux and the American diva Ellie Golding, which, based on the results of the judges and audience voting, ensured her way to the Live playoff tour.

There, Martinez surpassed strong contenders in weeks 3 and 4 of her performances, and her pitching of tunes from The White Stripes and singer Alex Clare ensured the start of a full-fledged career, as well as hitting the charts, which included the Top 200 Single Chart on iTunes. But these achievements did not help Melanie to become one of the strongest participants, and she left the show, not for a minute regretting anything.

Regarding the project as a springboard for starting an individual career, the girl agreed with the musicians One Love and Kinetics and, having signed a contract with Atlantic Records, released the track "Dollhouse", and then the mini-album of the same name.

In August 2014, after a series of concerts in American cities, Melanie presented a full-length studio album "Cry Baby", which included the songs "Pacify Her", "Gingerbread Man" and "Mad Hatter". And the compositions "Soap", "Pity Party" and "Carousel", equipped with vivid video clips, became separate popular singles, which received certificates and got to high places in the Billboard.